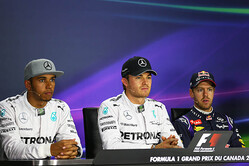 Nico, your first pole here in Montreal and given Lewis' record here over the years you must be delighted.
Nico Rosberg: I'm not really aware of Lewis' record or something but of course I know it's a track where he's very strong at, so all the more I'm very, very happy that it worked out. It's great. It's been a fantastic day and also all through the weekend really progressing all he time, getting stronger and stronger. It's really cool and best position for tomorrow of course.

It's been very close all weekend of course, but Lewis did have the upper hand going into qualifying. Where did you find the difference today?
NR: It's just working at it all the time: looking at data, working with my engineers, trying to just improve the set-up, trying to understand what are the areas where I can do better. It's really just an onward process and it's great that it worked out.

Lewis, you were behind on the first runs in Q3 and then on your final run it looked like you lost time in the middle sector. Can you tell us what happened?
Lewis Hamilton: Not particularly. Nico did a fantastic job today, so congratulations to him. Just wasn't the greatest qualifying session this; sometimes you have good ones, sometimes you have bad ones. But it's great for the team that we have got the 1-2 in quali. A really fantastic performance by the team, so let's hope we can make history tomorrow.

Well, it's seven one hundredths of a second only the difference between you today. Can we expect a similarly close battle in the race tomorrow?
LH: I would assume so, yeah.

Thank you for that. Sebastian, a great final lap, you saved your best until last?
Sebastian Vettel: Yeah, indeed. The start of the last lap wasn't great. I still didn't manage to get that first sector right, the first two corners I didn't get along very well with today. After that I tried to take more risk and it worked, so sector two was very good through the two kind of chicanes, especially the second one; I found a significantly better line and more time compared to previous runs and kept it together until the end. So, all in all, a very good result. I think it was the maximum we could do, very close with the people behind, obviously half a second to the Mercedes in front, but yeah, I think four cars were within five or six hundredths of a second, so obviously I'm happy to be the quickest one of those.

Obviously you won here last year, like you say the margin to Mercedes is big but you've got the Williams to contend with tomorrow. What are your thoughts on prospects for the race?
SV: We'll see. It's a long race here. Strategy I think could be a bit of a surprise, so we'll have to wait and see what happens. But as you touched on Williams is very, very strong here. They have a very, very quick down the straights. Generally the Mercedes-powered cars are looking forward to the straight lines tomorrow. I'll try to obviously stay as close as I can to those two, maybe get some tow and do the best I can. If we have a chance to attack them then we should go for it.

Coming back to you Nico, again same as in Monaco you had the advantage after the first run in Q3. Can you talk about the confidence that gives you going into your final run, knowing that you're in that position; that you've got the pole and it's up to the other guy to take it off you?
NR: Of course that helps a lot because I have a banker in and that's a big advantage to have, definitely. That was also a benefit.

So Nico, the word you used in Monaco was momentum: you stopped Lewis' momentum there and you've carried that on here. Now you've got the momentum. Can you talk about that and how you take that forward into tomorrow's grand prix?
NR: Well, it's just that little bit extra when you have the result, when I have that result behind my back and I know I've come here knowing that I've won the last race. It just helps a bit. Lewis obviously had that winning streak and to bring that to an end was important.

Lewis, you talked about the importance of pole position here in Montreal. How do you see it? On the one hand it looks like an easy track to overtake on but from where you are now, you thinking about that for tomorrow, how important to you in your mind is not being on pole?
LH: Yeah, it's not that easy, especially with Nico being so fast, so overtaking is going to be very difficult, to overtake the same car as mine - especially when we're so close in pace. So, we'll do what I can but, of course, the thing tomorrow is to try to make sure we get as many points as we can.

Sebastian, can you talk a little about the improvements that Red Bull have bought here this weekend - obviously we heard something about Renault giving you a bit more power - and how you feel all of that has contributed to you being here now.
SV: Well, honestly I don't know where the Renault talk comes from but I think as far as we're concerned, yeah, we always obviously try to improve but we didn't have any major steps for here. Regarding the car, obviously you run a little less downforce around here, which I think is obvious and probably the same for everyone. And... yeah... we brought some bits, other than a different downforce package as well, which seemed to work - but obviously we're fighting a very big gap and it's difficult to close it in one go.