A reprimand for Maldonado 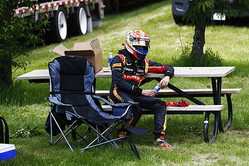 Pastor Maldonado has been handed his first reprimand of the season following an incident during today's qualifying session.

The Venezuelan, who was forced to park his car during Q1, thereby failing to make it through to Q2, in order to prevent damage to his power unit, left his car without the steering wheel in place, a breach of Article 30.5 of the FIA Formula One Sporting Regulations.

The Stewards noted that the car was not left in a dangerous position on the track and consequently felt a reprimand was appropriate.

Meanwhile, Esteban Gutierrez, who was unable to take part in qualifying following his accident in FP3 which necessitated his team changing his chassis will start tomorrow's race from the pitlane as his gearbox has been changed before 6 consecutive events have expired and his survival cell needed to be replaced.

Finally, Kamui Kobayashi, who qualified 20th, will drop five places on the grid as a result of his team changing his gearbox was changed during the break after FP3, the unit having been changed before 6 consecutive events had expired.