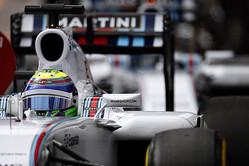 Benefitting from his team's engine (ahem) reliability updates, not to mention another raft of aero updates, Fernando Alonso was quickest in yesterday morning's session.

Normal service was resumed in the afternoon when Lewis Hamilton led a Mercedes 1-2, but the Ferraris remained competitive as did Red Bull and Williams. Indeed, on the longer runs towards the end of FP2 the Martini liveried cars were keeping pace with the championship leaders.

Indeed, wear and degradation are extremely contained. In terms of wear, Pirelli believes the soft tyres could go for 70 laps and the supersoft for 25. As for degradation, it is negligible for the soft tyre and less than 0.1 seconds per lap for the supersoft. As a result, they expect to see between one and two pit stops. However, with the increased temperatures today, and possibly tomorrow, that could change. Indeed, who can forget Paul di Resta's marathon run here last season.

As ever, the greenness of the track and the dust meant we saw lots of detours, spins and lock-ups, though some of these were courtesy of the brake-by-wire systems that are still causing problems for some of the teams.

A number of teams had issues, most notably the Renault runners, with Toro Rosso encountering battery problem with Vergne's car in the morning and having to change Kvyat's power unit in the afternoon.

The lights go green and Maldonado heads Sutil down the pitlane. Vergne, Massa and Bianchi are close behind.

One by one they get to work and while most return to the pits after a sole installation lap, Bianchi continues, the Frenchman having little running yesterday following his 'brush' with the walls in FP1. Though his car was repaired in time for FP2 he subsequently encountered a power unit issue after just 3 laps.

Seemingly confident following yesterday's performance, Alonso waves to the crowd. Elsewhere, an early off for Gutierrez at T10.

Seven minutes into the session all have made an appearance bar Button. On the other hand, teammate Magnussen is the first driver to post a time (1:20.953). Next time around the Dane improves to 18.325.

Ericsson, who missed much of FP2 due to a transmission issue is the second driver to post a time, the Swede stopping the clock at 26.545. Elsewhere, Button finally comes out to play.

As Ericsson improves (22.291), Magnussen has a moment at T8 where there's cement dust on the track following an earlier spill. Button complains of a brake balance problem.

A 19.561 sees Hulkenberg go second but he is soon leapfrogged by Sutil and then Kvyat.

Game over for Gutierrez who spins and clouts the wall at T4. Out comes the red flag.

Replay shows the Mexican hitting the wall with some force, Sauber's miserable Montreal weekend continues. Indeed, the Swiss outfit faces a busy time during the break if it is to have the car ready for qualifying.

As the stricken Sauber is removed, Magnussen is quickest, ahead of Hulkenberg, Kvyat, Sutil, Ericsson, Gutierrez, Button and Bianchi.

As the session resumes, Mercedes warns its drivers about the cement dust at the T8 chicane which has already caused problems for a number of drivers.

The first few laps are surprisingly tentative, it can't all be about the cement dust surely. On the other hand, a number of drivers were on their first hot laps when the red flag came out.