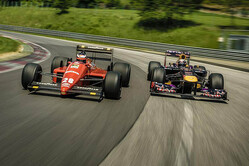 Sebastian Vettel and Gerhard Berger trade cars at the Red Bull Ring ahead of Austria's first Grand Prix since 2003.

The world champion and Berger took turns at the controls of two very special cars - the RB8 that Vettel drove to five wins and his third world title in 2012 and the Ferrari F1 87-88C that the Austrian took to victory at the 1988 Italian Grand Prix.

The day started out with Berger taking Vettel up to the western edge of the original circuit to show the four-time champion how racing used to be done in Austria.

"I have to show you, if you see it you won't believe that we used to race Formula One here," said the Austrian. "You go uphill here, at full speed, then there is a chicane, the Hella S, then behind that the Flatschach curve, almost fully uphill to the right, with no run-off zone, and then came the best - the never-ending, slightly downhill Schonberg straight with its bumps.

"At the old Osterreichring you used to drive a millimetre away from the crash barriers, at 220 mph. We didn't think anything of it. Today you'd say 'could that really be the case?' More than once practice was interrupted because an animal was somewhere on the circuit, a cow or a deer.

"Today (the track) has been superbly done," he continued, "it has been made safe but it's maintained its own character and gained the new facilities and the great grandstands that you need for an Austrian GP."

"Spielberg and Hockenheim had a special place in my heart," admits Berger. "Quick circuits like Spa, Monza or Suzuka always suited me. The home Grand Prix was always special though. In 1986 I had a lead of half a lap here and I was already privately celebrating. Unfortunately a part that cost one schilling broke."

"That was in the Benetton wasn't it?" asks Vettel, referring to the Benetton B186 with which Berger later won the Mexican Grand Prix.

"Yeah, with the 1000-horsepower BMW turbo," replies Berger. "It was brutal. I never wanted that but when you drive them - such as the 1988 Ferrari here - it's great: the turbo, the manual transmission, the pure driving."

That was the cue for the pair to try out the Ferrari and the RB8. Berger slotted himself into the narrow cockpit of the Ferrari and waited for the fire-up, conducted by three of the mechanics who looked after him back in his Benetton days.

It wasn't clear before the run whether the 10-time GP winner would still be able to drive the car, due to an old skiing injury which might have prevented him using the manual gearbox. There were no problems, however, and Berger was soon guiding the car, designed by Gustav Brunner and developed by John Barnard, out onto the track. Vettel quickly followed in the RB8. They then swapped machinery.

"Strange, the shoulders are out in the open air," said Vettel of the Ferrari during a quick return to the pit lane. "For the first time I can see the mountains from the track! The legs go downwards instead of upwards with cars nowadays. This is so pure, so direct! Because of the lack of downforce you don't get the curve speeds but damn it, it has enough power. It's a lot of fun. Awesome!"

Berger had some words of advice: "If it slides, then it slides very softly. You notice that it is a mechanical car and is not aerodynamic. In the quick curves I didn't try anything much as I had too much respect. It is just like old school car driving - you need to blip the throttle precisely and shift gears cleanly."