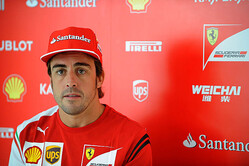 Fernando Alonso has revealed that he will not consider retiring from F1 until he has won a third title.

The Spaniard, who won back-to-back titles in 2005 and 2006, has since finished runner up three times. However, with Mercedes currently dominating and his own team showing no real sign of returning to the form which saw it in a similar position around a decade (or more) ago, few would fancy his chances.

Whilst his spirit has not dimmed and he remains one of the fastest and most determined drivers out there he does not currently have the car or the infrastructure with which to mount a serious and sustained campaign.

"We are still hungry for success, waiting for our opportunity to become champion," he told BBC Sport. "This is the main goal and you don't think of retiring until you get some satisfaction.

"It is something I am working for and hoping for," he admitted. "Three titles means a step. It is not that I'm not happy with two but the third puts you in a list of very important names.

"I have been close twice and hopefully the next opportunity we have we don't miss it again.

"I think I can carry on long enough to win and to be competitive for some good years," he continued. "I don't know how many… three, five, seven. I don't think it should be any problem."

However, admitting that much would also depend on whether he continued to get satisfaction from the sport and enjoy his racing, he also revealed that certain aspects of the 2014-spec cars frustrate him.

"The new F1 cars are heavier, slower, difficult to understand what the car is doing, you cannot push all through the race," he said. "You push two laps and then you save tyres until the next stop. Sometimes you don't even push. So this is not something racing drivers like to do.

"I'm just hungry to win," he added. "At the moment we are so far away from being in that position that it is not frustration, it is just we need to do better."