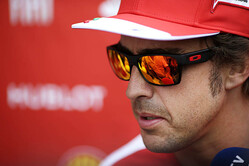 Fernando Alonso has been invited to wave the flag that sees next month's Le Mans 24-hour race get underway.

The Spaniard, who finished a distant fourth in Monaco yesterday, will wave the French tricolour that will officially start the 82nd running of the classic endurance race.

Eight-time outright winners at the legendary Sarthe circuit, including a run of six successive wins between 1960 and 1965, the Italian company has also enjoyed numerous class wins.

Company founder Enzo Ferrari rightly regarded the race as a true test of man and machine and admitted that he raced in F1 in order to finance his Sports Car dream.

"I am very happy to have been chosen to start this race," Alonso told the Ferrari website, "because it is one of a handful of races that has defined the history of motor sport.

"I'm keen to check out the details on this type of car," he continued, "In Formula 1, we have also entered the hybrid era and I am curious to find out more about the working methods and technology involved in this series."

Attending the event, which takes place on 14/15 June, will also allow him to catch up with some of his old F1 buddies including former teammate Mark Webber who is back in Sports Cars with Porsche.

"For sure, it will be nice to see Mark, who is a great friend of mine. We miss him in Formula One and I want to know how he's getting on in endurance racing."

As he ponders a season (or two) picking up the scraps left behind by Mercedes, Alonso might well see Sports Cars as an attractive alternative.