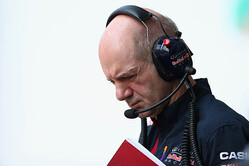 As the (media led) speculation over Adrian Newey's future continues, the Red Bull design guru has reaffirmed his commitment to the Austrian team.

For some weeks now the media has been pushing the idea of Ferrari recruiting Newey, who has enjoyed title-winning success with Williams, McLaren and Red Bull, a feat which not only puts him among the greatest designers to grace the sport but also makes him highly sought after.

With Ferrari in seeming disarray and clearly in need of a major overhaul the obvious move has been to link the Englishman with the Maranello outfit. Ignoring the fact that the days of the lone superstar designer are long gone, and that now he is part of a massive team - albeit its leader - one really wonders if Newey really needs the hassle.

The Guardian quotes Gary Anderson as saying: "If he could win races and championships with Williams, McLaren, Red Bull and Ferrari it would make for an impressive CV."

Based on those titles with Williams, McLaren and Red Bull isn't his CV impressive enough anyway? Furthermore, while drivers might feel it is a rite of passage to enjoy a stint with the Maranello outfit this isn't the case with designers, especially considering the pressure from the media and the company's powers that be peering over your shoulder.

Asked about the speculation in Monaco, Newey, whose immediate challenge is to take the fight to Mercedes, said: "I remain committed to Red Bull for the foreseeable future."

Sadly, this gives the usual suspects the opening to claim that he didn't entirely dismiss the idea.

Fact is, it is going to take more than one superstar designer to get Ferrari back on track, as Adrian well knows.