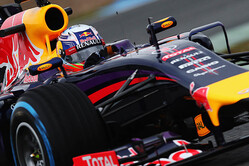 Daniel Ricciardo: "Without putting too much attention on Mercedes, I'm happy with what I'm doing, so I think today was pretty good and I wasn't too disappointed with the lap. I don't really see how I could have improved much more today, so I think we're doing the best we can, but now that we're around third or fourth I want to close the gap to the silver cars! Sorry for Seb, he's had a pretty rough weekend. I prefer it when we are both able to compete. Looking to tomorrow, then I think third is the best we can do. If Mercedes continue at the pace they had today then realistically we won't catch them, so then third, although it wouldn't be a victory, it would be really satisfying."

Sebastian Vettel: "I left the garage for Q3 and lost drive in second gear; I still had third gear and above so we thought we could do the lap with that, but by Turn 1 I had lost all the other gears, so we couldn't continue. I was getting more in to the rhythm with each lap after missing yesterday's sessions. It was quite close between the cars after the Mercedes and I think I could have had a go for P3 today, but we didn't get that far. I'm of course quite disappointed."

Christian Horner: "I certainly think today Daniel got every ounce that he could from the car and drove a very strong qualifying to line up third, and on the second row of the grid. It's a great shame that we didn't have Sebastian right there as well due to a gearbox issue that we're yet to fully understand, so we'll get the car back and see whether it's a software issue or a mechanical issue that's caused the problem."

Thierry Salvi: "We expected improvements here with programs having been conducted at the factory in different areas, including the ICE and energy management. There is a step compared to Shanghai but obviously everyone else has worked hard as well before Barcelona. It was not enough today in quali with Daniel securing 3rd place but not able to fight against the Mercedes. There is still a long way to catch the right performance level. Seb was unlucky as he had an issue after Q2 and was not able to complete Q3. It's always hard to accept but that's motorsport. A tough race is already planned for tomorrow!