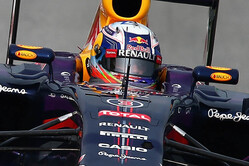 Daniel Ricciardo: "It's nice not to have gone backwards during the short break and I think we have shown improvement; we want to close the gap to Mercedes but they don't seem to be showing any signs of slowing down! It's not great that Seb wasn't running, two cars means twice the amount of feedback for the team and you don't learn so much from one when you are trying new parts - but at least we got some good data. The short runs and long runs were both okay today."

Sebastian Vettel: "We had a simple failure in one of the looms this morning, which caused a short and meant the car stopped. We had to change the chassis loom, which is a big job so I wasn't able to go out this afternoon. It's a small failure, but a big consequence; there was nothing new on that part of the car, it was something new that happened in that area. Luckily it happened today (rather than tomorrow), but unfortunately we lost the chance to prepare for Sunday with two cars, so I have to rely on what Daniel did today and get into the rhythm straight away tomorrow."