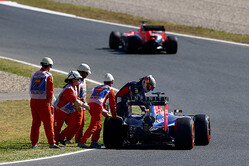 Sebastian Vettel will not take part in today's second free practice session at Barcelona due to an issue with his car in FP1.

The German ground to a halt short after the start of the session having completed just 4 laps.

Around an hour before the start of today's second session Red Bull tweeted that the world champion will play no further part in today's activity.

"Due to an electrical problem that has damaged the wiring loom of Car No. 1, Sebastian will not be able to take part in FP2," said the team. "The Team will use the time to fix it to be ready for FP3 tomorrow."

Whilst Vettel finished twentieth in the opening session teammate Daniel Ricciardo was third, albeit 0.950s off Lewis Hamilton's pace.