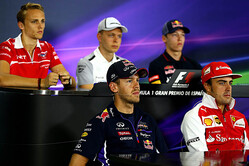 Daniil, can I start with you? Three points finishes, one 11th place, you must be quite pleased with the way things have started in the first four races?
Daniil Kvyat: Yeah, it's going quite OK now. A bit of a shame not finishing in the points in Bahrain as well, but anyway you have to learn from something. So far we've been a bit on the limit of the points zone, but I hope that we can make some good steps and become even a bit more competitive, so we can take points a bit more easily. It would be a really good step but we are working hard together and soon it will be reachable.

So the story so far is that Jean-Eric Vergne your team-mate is three-one up on you in qualifying but you're ahead of him in races. He's had a few reliability issues in races but how do you see the balance between you, and your own progress?
DK: I'm not really looking too deeply into these scores and so on. We've been quite close. Don't forget that Jean-Eric is a very fast driver and he's in the peak of his shape probably now. Also very experienced. In the wet I have to admit he was very fast so far and in Bahrain it was a dry quali. Of course, he's also been having a bit of issues. But in China it was a very good balance. I was quite happy in the race. I was quicker than him at that point but in the end we have to see in the future races.

Max, coming to you. The run continues: 23 consecutive finishes in your Formula One career, two 13th places so far this season, are you proud of what's been achieved so far?
Max Chilton: Yeah, I am. Last year it wasn't a perfect season but lots to take away from it. I remember someone asking me in me in Monza, I think, saying: 'you're 10 races in, that's a good little record you've got going there'. And then I broke Tiago [Monteiro's] record, which was 16 from a rookie start, and we though it would be nice to get to the end of the year, which we did. Credit to the team; that's pretty good for a small team reliability-wise. And we're four races in now and we've carried that on. It's not our main goal, but where we are it's absolutely crucial to finish the race as I've shown this year with the two 13ths. We did have good speed but we had to be there at the finish to make sure those results counted. So we will try to keep it going but our main focus is to try to get a bit more speed out of the car and myself.

Apart from Malaysia, in the races where you and Caterham have both finished Marussia has tended to be in front of them. Can you say a little bit about how you see that battle and also about how close you feel you are now to the teams in front of you?
MC: We've always had a good battle with Caterham. They kind of hold back sometimes, I think, in practice and qualifying and surprise us in the race. But I think this year, to me, our car is definitely better. We're developing well. We've brought some good updates to here. I'm not sure if they have or not. It would be nice if we could push forward. Sauber hasn't been too far ahead of us and we've been battling with them in at least the first few stints of the race and so... yeah, I guess you've got to focus on the cars in front, there's no point in focusing on your mirrors, so we'll try to improve our results this weekend.

Thanks for that. Coming to you Pastor. Obviously you're a former winner here in Barcelona. Lotus in Q3 in qualifying in China, running in the top 10 obviously. How would you describe progress within the team?
Pastor Maldonado: It's clear that we have been progressing quite a lot in the last couple of races. Still maybe we were not at 100 per cent but we've been working really hard. Hopefully here with a bit more time, putting everything together we can be much more competitive and we can fight for good places. This is our main focus at the moment and I think we can. We have a good car, a good team. We have been not good enough with all the new engine system at the beginning but now it seems to be more clear in terms of technology, you know, controlling all the systems in the car and hopefully from this race to the end of the season it will be much better for us.

We've heard about a lot of new parts on the car this weekend and also power unit upgrades from Renault. What are you expecting and what are you expecting from yourself this weekend?
PM: I'm expecting to have no problems, a competitive car, and do my best. I the past I've been quite good here, so I think as soon as we manage to solve all the problems we will be back to fight for good places.

Sebastian, Red Bull have announced that you have a new chassis this weekend, so I wonder if you could share with us what's in it, why do you need it? Obviously, we've heard you saying that you don't feel that the car was talking to you; maybe you'd like to elaborate on that. So, what are you looking for from this car and how close do you think you're getting to finding it?
Sebastian Vettel: I think we concluded after China, where we were quite a little bit behind to change the chassis, so actually it's not a new chassis, it's an old one that we used in testing in the winter, and we have some experience with it. It's more a sanity check rather than a real problem with the other chassis. So it's just to try everything we can and basically reset and start again. Obviously there is still a lot of work ahead of us, as I mentioned after the first couple of races, maybe I'm not as happy as I want to be but it's a long process, a lot of things have changed and I think we need to be patient.