F1 drivers get behind the lens 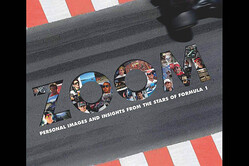 It's a hard life being an F1 driver. While most people were relaxing at home with family on Easter Sunday F1's superstars were tearing round the track in China. It makes you wonder what they would have been getting up to if they hadn't been at work.

F1 drivers are famous for being in front of the lens but a book which has been released this month turns the tables. It is called Zoom: Personal Images and Insights from the Stars of Formula 1 and it is available to buy now in UK bookshops via the VSP website.

The book is published by Vision Sports Publishing, the company which produces the official Wimbledon annual, and it is a glossy affair. It contains photos taken by all of the drivers and team bosses as well as a host of superstars from behind the scenes of F1 such as the sport's boss Bernie Ecclestone, 1996 champion Damon Hill and Red Bull Racing's design guru Adrian Newey. It has an introduction written by Ecclestone but you don't buy a book like this to read the words.

The drivers clearly perform just as well with a camera as they do with a steering wheel and it is hard to pick a favourite because they are so varied. Fernando Alonso's shot from the Monza podium of a grid packed with Tifosi has an eye-catching level of detail. Red Bull Racing team principal Christian Horner's photo is a close up of his beloved pet donkey whose snout takes centre-stage. Lewis Hamilton shows his religious side with a snap of the famous Christ the Redeemer statue in Rio de Janeiro whilst Sebastian Vettel went for a mountain shot in Austria.

Accompanying all of the images are first-person tales from the photographers and they give a unique insight into the personal lives of F1's most famous names. "I enjoy the mountains very much," says Vettel. "They give me a lot of freedom and many possibilities for sports activities. It's especially great in winter time when I can go skiing. The Red Wall in Austria's Vorarlberg is awesome. I went there with my family for my first ever skiing trip and just love to come back there. I feel at home and can relax and enjoy."

Others are slightly less expansive. Jenson Button's photo of his McLaren race crew is labelled "thanks for your hard work guys," whilst Kimi Raikkonen's photo of a tree beside a lake has the caption "after a busy F1 weekend, I like to relax away from everything. The natural world is very peaceful to me." Ecclestone's photo is of the view from the lounge window of his chalet in the Swiss ski resort of Gstaad where he got married in 2012. It is a picture-postcard shot of turrets, pine trees and mountain peaks and is a change from his photo the previous year which, as Pitpass revealed, was of a cart outside the chalet

The Zoom concept was created in 2012 by Pitpass' business editor Christian Sylt who realised that although there are plenty of charity auctions in F1 they all tend to follow a similar format. Charity auctions in F1 usually offer signed photos of the drivers so Zoom was created to turn that on its head. All of the photos are taken specially for the initiative before being printed and signed by the photographers.

Zoom is the first ever auction of signed photos taken by the stars of any sport and is one of the only independent events in F1 which involves all of the drivers and team bosses. They come together in aid of a very good cause because their photos are sold at an annual auction in aid of Great Ormond Street Children's Hospital. The most recent event took place in February at London's InterContinental Park Lane hotel and was hosted by the BBC's F1 presenter Suzi Perry.

Pitpass was represented by Sylt and and there were a total of nearly 400 guests. They included Ecclestone, his wife Fabiana, his daughter Tamara, Horner, Hill, Williams' deputy team principal Claire Williams, Formula E CEO Alejandro Agag, Bahrain International Circuit chairman Zayed Alzayani, the celebrity chef James Martin and Status Grand Prix founder Mark Gallagher who was joined by his son. Sky Sports, Pole Position and F1 film-maker Mario Muth were on hand to film the proceedings and a video taken on the night.

The photos raised more than £20,000 with the highest-seller being Alonso's snap which went for £3,250 to Alzayani who faced stiff competition from James Martin. Other notable buyers included Williams, who took home Horner's donkey portrait, and Agag who bought a photo taken by former Renault F1 boss Flavio Briatore of a seagull on the balcony of his home in Monaco.

As an extension of the Zoom theme, camera manufacturer Nikon provided a batch of its COOLPIX S9500 cameras which were signed by some of F1's most famous champions including Alain Prost, John Surtees, Jacques Villeneuve and Raikkonen. They were also sold at the auction and, like the photos, all of the proceeds went to Great Ormond Street. It also benefits from the sale of the book so you can feel good at the same time as peeking inside the private lives of your favourite F1 stars.

You can see a selection of the pictures here.