Horner: We are determined to keep pushing 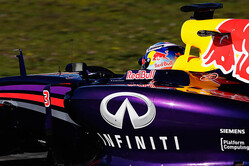 Admitting to Mercedes dominance, Red Bull boss Christian Horner vows to keep pushing, though he knows the magnitude of the task.

In the wake of another 1-2 for the Silver Arrows, third placed Daniel Ricciardo finishing 49.014s behind winner Lewis Hamilton, Horner knows the enormity of the task in hand.

"Mercedes have got themselves into a dominant position; they worked hard to get themselves into that position," he admits, "if we had a choice we either all pack up and go home or fight to close the gap. We've made small inroads this weekend and we are determined to keep pushing to close that gap down. Obviously maximum points weekend after weekend for them is putting them into a strong position."

Referring to the advantage the silver cars enjoyed at Barcelona, he said: "The 48 second gap is slightly artificial because we lost a lot of time behind the Williams (of Bottas) and then once you find yourself in no man's land it is about managing the tyres to the end of the race.

"If you look at the last stints in particular where Mercedes were pushing flat out and Sebastian and Daniel had clear air we definitely moved a bit closer and for sure they were pushing as hard as they could, it wasn't like Mercedes were taking it easy.

"It's a significant gap the we still have to overcome," he admits, "but it's great to see we have made progress and taken a step ahead of the Ferrari's and the rest of the field.

Asked about his two drivers, he replies: "It was a great performance by Seb, I think he really went for it and he passed pretty much everywhere apart from the conventional place at the end of the straight and he made the strategy work for him, he knew he had to make the passes and I thought it was a fantastic drive by him.

"(Daniel's) done a great job this year and he's so calm in the car. He just continues to impress us with his speed, with his approach, he's enjoying what he's doing and you never see him not smiling.

"It's a pleasure to have him in the team and the two guys are working extremely well together. I cannot speak highly enough of what Daniel's done in the first five races."

Looking ahead to next week's race in Monaco, a circuit that usually throws up a surprise or two...

"Monaco is Monaco and as you know Mercedes have been strong there the past couple of years and their drivers have always excelled there, on paper they go there very much the favourites. Monaco being Monaco anything can happen..."

And as for the controversial new formula.

"I think there's areas we can improve for sure as a sport," he admits. "If you look at the first five races, certainly as things are now settling down teams are finding their way how to operate these cars and there is some good racing going on.

"One thing that will hopefully be addressed is the noise, Mercedes are doing some tests, but it seems to be settling down.