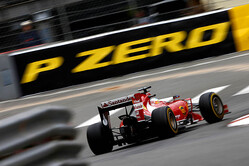 While luck deserted the Italian team on the streets of Monaco the word made numerous appearances in the post-race press release, Kimi Raikkonen rightly feeling that he was dealt a series of dreadful hands on Sunday following a start that promised so much.

However, as the team looks ahead to Canada and then the resumption of the European season, Technical Director James Allison knows that it cannot rely on luck but serious hard work and innovation if it is to maintain the gap to the leaders far less close it.

"In Monaco, we continued to analyse the areas in which the F14 T can be improved and now, we are looking ahead to the next race in Canada, where the package we will use there is a good step faster than the car we raced last weekend," he told the team's website.

"While our development programme has progressed well in recent weeks, it is hard to predict exactly what this will mean for the competitiveness of the F14-T, as we do not know what steps our competitors plan to bring to Montreal," he admitted. "So any improvement has to be seen in relative terms, hoping that the track will deliver an answer worthy of all the efforts we have made so far."

However, the Englishman and his team is looking much further ahead than Montreal, and suggests that there is to be further restructuring at Maranello.

"We must be able to make the most of the creativity and originality of our engineers," he said. "We know there is no magic wand, but there is a wealth of talent at Ferrari and we are working on an implementation and an approach to the work which allows it to emerge."

Speaking in Monaco at the weekend, Allison, who only joined the team last September and has minimal input in this year’s car, admitted, clearly with an eye on Mercedes, that one cannot have too much technical talent on board suggesting that if Ferrari is to improve he is not adverse to it recruiting additional talent.

All of which is sure to kick start the rumour mill…