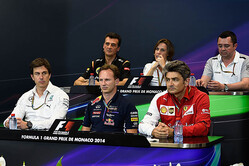 Let's start with Claire Williams. Claire a strong performance for the team in Barcelona but in some of the earlier races you maybe let a few points fall by the wayside. Where do you feel you are at and are you on the right track?
Claire Williams: I think we are in a really good position now. I think we all have to remember where we were last year and to make the performance improvement that we have over finishing P9 in 2013, I think the team have done a fantastic job to turn things around in the way that they have. We entered this season always wanting to get both cars in the top 10 in qualifying and then to score points in the race and we've pretty much achieved that, so I think everyone at Williams should be really proud of what they've achieved. I think you can always look back and go 'I wish we could have done a bit better' and we potentially could have scored a few more points but I think we should all be pretty pleased with P5 in the championship at this time.

Thank you for that. Moving on to Federico. Quite a progression for you from Melbourne to Barcelona, in just two months, and a promising test after the grand prix, where do you feel your team is at in the development cycle and which teams are you targeting to challenge at this point?
Federico Gastaldi: Well, we have done, obviously, a progress from the start of the season but we're still working on it; we're not where we want to be. We want to be in front of our friends with the red jacket, as we were last year, fighting in that position. So that's our target pretty much - to go back to where we were last year.

Thank you for that. Moving to Eric. Obviously you've had a few months now at McLaren; what have you discovered, what changes would you like to make and how will you manage the split development programme as the year goes on between the 2014 car and the 2015 Honda car?
Eric Boullier: Yeah, it's been a few months. Obviously it's a great team. It's an institution I should say. I did settle in very well. Obviously we are not performing at all where we should be or where we want to be, so there is obviously a lot of time to spend to go through as a company and find out to what needs to be fine-tuned or changed to make the team better. It's true that actually it was a last week debate about the transition between 2014 and 2015. It's a decision we have to do shortly shall we say because obviously as you know most of the teams switch their resources during summer and like usual I should say. This is where we will be but we have started already to work on next year's car.

Christian, tell us about the opportunity that this race here in Monaco presents to Red Bull at this stage of the season and also the progress going on behind the scenes to catch Mercedes on a regular basis.
Christian Horner: Obviously Monte Carlo is a unique track and it's layout, the nature of the circuit, doesn't put such a premium on straight-line performance, which has been our weakness this year. So we're hoping to give these guys [Mercedes] a run for their money this weekend. For sure they're going to be strong again here. They've always been strong in Monaco. But we've had a solid day today, the drivers have been feeling their way into the circuit and working on the set-up and it's been an encouraging start to the weekend. Obviously when you consider where we were pre-season to where we've come to at this stage, we've come a pretty long way in a couple of months and hopefully if we can keep that rate of progress up then we will be able to challenge the two Mercedes drivers before hopefully too long in the future.

Coming to you Toto, it looks like it's going to be another close one between your two drivers, Lewis Hamilton and Nico Rosberg, this weekend. What does that battle look like from inside the team and how is it to manage?
Toto Wolff: It is of course a nice problem to have, to have two cars up in the front battling with each other. They do it fair and square. We haven't seen any incidents up until now and I hope we can sustain that. Having said that we musn't be complacent, because Red Bull... Ricciardo was very close today and obviously Monaco is a track where horsepower doesn't matter so much and straight line speed doesn't matter so much, you can see that the gaps have narrowed a bit today, at least from what you have seen in free practice one, so interesting times.

Coming to you Marco. Welcome to your first FIA press conference. A rapid learning curve for you. Do you already have a vision of the kind of Ferrari team you want to lead.
Marco Mattiacci: I would be extremely arrogant in saying that we already have a vision. Definitely we are having a picture, a quite accurate picture of the problems we have experience so far. It is clear the gap toward the leader of the championship. So we are clear what are going to be the next steps. I wouldn't say vision, we know that we need to have a continuous improvement every race and that's the way we are working. We have a lot of assets, as I have said, very positive people, drivers but definitely there is the need to improve dramatically.