Raikkonen: My motivation is intact 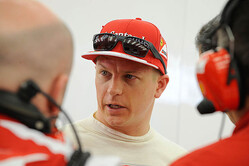 Taking part in a media event in Norway just days after the frustration of Monaco, Kimi Raikkonen insists he hasn't given up the fight.

Following a superb start, which subsequently saw him running as high as third, the Finn's race gradually began to fall apart, culminating in an extra pit stop after being hit by Max Chilton during the Safety Car period.

Consequently, as opposed to taking his first podium of the year, and Ferrari's second, the Iceman ended the day twelfth, a lap down on race winner Nico Rosberg.

Attending a media event with Santander in Norway, which saw him competing against journalists in a Kart race, Raikkonen insisted that he remains a motivated as ever.

"I think it is very difficult for anyone to battle with the Mercedes drivers but you never know," he said. "I would like it to be us even if that will be hard, especially for me personally, given the position in the championship. But I have always been used to fighting and together with the team, which is still hard at work on the development of the F14 T, I hope to be able to get some good results.

"As I've said, we are doing an incredible amount of work and I think we will sort out our problems, but you need time. If we manage it before the end of the season the results will come because my motivation is intact."

The Finn, who admitted over the Monaco weekend that he envied the drivers of the past who were able to contest other disciplines alongside their F1 commitments, said he doesn't feel he is a different driver compared to his title-winning year in 2007.

"I have more experience compared to when I won the title and I am a few years older but I don't feel it and I still have a great desire to race," he said. "As for rallying? Certainly I would like to do more of it but for now I'm completely focused on Formula 1."

Meanwhile, teammate Fernando Alonso, who finished fourth on Sunday, albeit 32s behind Rosberg, has been spending time in the simulator working on preparations for the next two tracks in Canada and Austria, the latter returning to the calendar after an absence of eleven years.

The Spaniard is only one of three current drivers, the others being teammate Raikkonen and Jenson Button, to have raced on the circuit before.