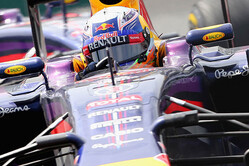 Sebastian Vettel: I always like going to Silverstone, the track is incredible to drive and the British crowd that turns out to watch the weekend is always massive - whether it's wet or dry everyone always looks like they are having a really good time. This year I will be staying in the UK after the race which is good because normally we have to leave straight after. It's a busy time right now, we had Red Bull's home race in Austria, the Team's local event here and then we go to my home race in Germany! This race has an extra element as it's so close to the factory and a lot of the staff who work so hard on the car will be watching from the grandstands with their families - I hope we can get a good result for them. As the factory is only about half an hour or so from the track a lot of the race team live nearby and can sleep in their own beds for the weekend which surely is a nice thing for them. I have good memories of Silverstone, the best must be winning there in 2009 and Mark won there in 2010 and 2012 so we have a good record at the track.

Daniel Ricciardo: Silverstone is great. It's just a great, great racing circuit. It's fast, it's flowing and you really get to rag your car for all it's worth. There's nowhere better at letting you know how very, very good an F1 car is than Silverstone, and in particular through that ultra-fast Maggots-Becketts-Chapel complex. The two hairpins at Turns Three and Four give you quite a variation of racing lines, even though they're 'just' hairpins. You can push hard through the first one and sacrifice the second or you can do the contrary. The more I drive it, the more I also enjoy the new section because it creates more chances for overtaking and it's not as straightforward as it looks. I'm looking forward to my first race with Infiniti Red Bull Racing this year at Silverstone, I know a lot of the guys are going to be watching at the track so I'll be going at it for a good result.

What's special about the British GP?
Christian Horner: Well, Silverstone is a fantastic event. It's the Factory's local event, it's great that there are so many fans there and it's a unique atmosphere with all the camping and the smell of BBQs - there's always a real buzz about the place. I've been going there since 1992 and you always get anticipation, in a good way, when you go through the main gates.

And what about the British fans?
CH: They're among the most knowledgeable in the world and there's a tremendous support for motor racing in the UK, not just in Formula One, but across all the disciplines of motorsport and they're some of the most loyal and dedicated fans of all the countries that we visit. We always get a fantastic reception - they appreciate good performances, so irrelevant of the nationality of the driver, they've always respected the performance of a sportsman.

It's the Factory's local race, does that make a difference?
CH: It's fantastic that we've got so many of the factory attending the race, and we have a team grandstand so everyone can sit together and cheer on the guys on track. The factory is only about 20 minutes away from the circuit so it's fantastic to have so many of the team attend the race, to see their cars that they work on tirelessly all year, it is their one opportunity to see them live in action. And it gives an extra element for the race team as well, knowing their colleagues and families are in the crowd supporting them.

And what sort of show do you think the team can put on for those in the grandstands?
CH: All things being equal obviously the Mercedes have got such an advantage at the moment it's going to be tough to beat them, but as we saw in Montreal recently, anything can happen and we're going to be pushing hard. Renault are working hard on their side and hopefully we can give them a bit of a run for their money.