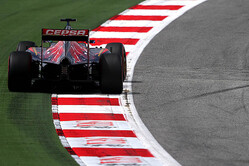 The Austrian Grand Prix may boast the shortest lap time of the season thus far but the same can't be said for the latest podcast. Glen 'Crompo' Crompton's fears that the team would be hard pressed to find five minutes worth of discussion proved ill-founded as Mat Coch had to exercise great restraint in keeping the final edit down to just under twenty-five minutes.

As ever, Pitpass editor Chris Balfe, 'Crompo' and Coch spent little time talking about the race, instead though they have come up with a novel idea in terms of preventing drivers exceeding the track limits drawing their inspiration from, amongst other things, the World Cup and the actions of certain tabloid journalists and editors.

There is growing frustration among the trio as they watch the sport repeatedly shooting itself in the foot. "It is alienating fans," argues Balfe suggests the ridiculous new rule propositions that appear almost on a daily basis show a complete lack of insight and intelligence and do the sport far more harm than good.

Red Bull is also on the receiving end following Christian Horner's comments about the Renault engines, sorry Power Units, Coch out-numbered when he suggests that the very public complaining has a motive beyond a simple whinge. A deal with Mercedes is perhaps on the cards, suggests Coch, with Williams demonstrating just how good the German engines are.

Williams' performance was a point not lost on the Pitpass team who are universally pleased to see the Grove-based squad, and Felipe Massa, back on the front row of the grid.

There is clear animosity between Crompo and Coch who fail to see eye to eye over Sergio Perez. While Crompo believes his race in Austria is proof of his ability Coch refuses to concede, suggesting the Mexican still has to work to reverse the reputation he gained in 2013.

Running at almost 25 minutes the shortest race of the year has generated the longest podcast, but in all honesty we couldn't bring ourselves to leave any more of the team's unique perspective on the cutting room floor.