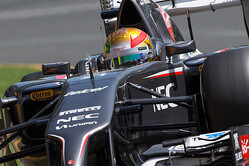 Austria was a race to forget for Mexican youngster Esteban Gutierrez who takes a grid penalty to Silverstone.

Having, along with Sauber teammate Adrian Sutil, failed to make it out of Q1 on Saturday, Gutierrez started the eighth round of the season from 18th on the grid, just ahead of the Marussias and Caterhams.

Already frustrated by a car (and team) which appears to be moving backwards, the Mexican was the victim of a mistake by the Swiss outfit which had all the makings of a comedy routine.

At his first pit stop Gutierrez was released before his right-rear wheel had been secured properly, the car grinding to a halt further down the pitlane as the team radioed him to stop. Unfortunately, a communications foul-up (we're being polite) meant that Sutil got the message also, the German duly obliging by stopping his car.

Deemed to have been released unsafely, a breach of Article 23.12 (c) of the FIA Formula One Sporting Regulations, Gutierrez was hit with a ten-second stop and go penalty as well as a 10-place grid penalty for the next race (Silverstone).

The Mexican was subsequently involved in an incident with Sebastian Vettel which saw the German's front wing damaged however the Stewards - "in light of the new guidelines from the Formula One Commission” - ruled that no further action was required.

"It was not a satisfying race," said Gutierrez who ended the day nineteenth, in a masterpiece of understatement.