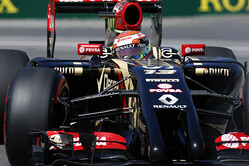 Pastor Maldonado will line up in thirteenth position with Romain Grosjean in fifteenth for the 2014 Austrian Grand Prix after continued struggles for pace on low fuel for the team at the Spielberg circuit. Both cars proceeded through the first qualifying session but were unable to make it into the top ten. Pastor set today's fourteenth fastest time and Romain the sixteenth, but both gain a position due to a grid penalty applied to Sergio Perez.

Romain Grosjean: "It's no secret that we've struggled so far this weekend. I had a very good Q1 session but Q2 was much more difficult. It's been a tough weekend and our pace on low fuel hasn't been great as we saw today. Yesterday we showed good pace on high fuel so hopefully we can use that as best we can in the race tomorrow. Certainly overtaking will be tricky as our top speed has not been one of our strengths this year but we'll look for a good strategy or maybe a shortcut on the track to help us in the race."

Pastor Maldonado: "We will start in P13 recovering one more place on tomorrow's grid which is always good. I think that we made a big improvement from yesterday when we had issues with the power unit. Today we have been a bit better with a bit more power and an improved balance. It was a good last lap for the package that we currently have even though we are not where we want to be. We were hoping to be more competitive on this track however we are suffering on the straights and up the hills. I look forward to tomorrow. Our pace has improved today and we have shown that we have potential on long runs so hopefully we will have a good race on Sunday."

How was qualifying for the team?
Alan Permane, Trackside Operations Director: "We expected to struggle today and unfortunately qualifying lived up to expectations. Finding grip was the primary issue and even though it's the softest tyre allocation in the range here, this year's compounds are still quite hard in absolute terms. This meant we found it very difficult to get the tyres into their optimum temperature operating window and so did other teams too when you consider the grid for tomorrow's race."

What can be done in the race?
AP: "The E22 is much more stable and happier in high fuel conditions so our relative race pace should be better. There aren't too many clever strategy permutations at our disposal but nevertheless we will look at all the options to give us the best opportunities in the race."