Lotus duo look ahead to Canada 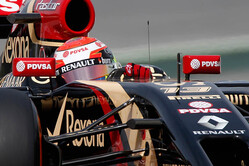 After salvaging points around the claustrophobic streets of Monaco, Romain Grosjean is ready to let the E22 stretch its legs at the Canadian Grand Prix...

Do you have good memories of Montreal?
Romain Grosjean: I have very good memories from 2012 when I went from seventh on the grid to my first second place in Formula 1. It was a really great day and it was really a strong team result as we used a one-stop strategy to get on the podium after a disappointing qualifying session the day before. Last year wasn't so good and we struggled with the wet weather and conditions but the place itself? Montreal is a wonderful city to visit. There are obviously a lot of French speakers so it's like another home race for me, and the fans are so welcoming and knowledgeable. There are also some very good restaurants in Montreal which is always a bonus.

How much of a challenge is the Gilles Villeneuve circuit?
RG: Montreal is in-between a normal circuit and a street circuit. The walls are very close in some places, while other parts are similar to a European circuit. It's definitely unique and we normally bring a different downforce package for that reason, which adds another unknown factor to the weekend. The circuit is not used for the rest of the year so the grip will change a lot - something we'll have to adapt to - and the weather can also be tricky. Hopefully it'll be nice and sunny because it's a race I really like - and it's my favourite circuit to race on the Xbox. The last chicane is a notable feature and overall it's a good track.

What is it about street or street-esque circuits that you like?
RG: I enjoy the sensation of being close to the walls. Montreal is different from Monaco as there are some long straights and some big braking moments. The track surface can also present challenges as we've seen in other seasons, so it will be interesting to see what the grip level is like this year and that will certainly be on your mind as you take to the track for the first time over the weekend.

How would you sum up Monaco given that the car wasn't reacting as you wanted, but you still matched your best result of the year?
RG: The start of the Monaco Grand Prix was a nightmare because I was hit on the first lap and suffered a puncture. Then I was stuck in traffic and couldn't overtake. Of course when you have a predictable car with plenty of grip it is easy to attack, but we struggled to find a base set-up and it clearly wasn't good enough in the race. But anything is possible in Monaco, we didn't give up and managed to recover from 19th to 8th. We scored points and we know where to improve the car, which is not quick enough in low speed corners and certainly we're trying to get more power for Canada too!

And the high speed corners?
RG: They are not a concern. The aerodynamics are stable and the power unit management is getting better so now we are more focussed on the suspension side. Last year we had a very good car in that aspect, so we'll compare the E22 with the E21 and possibly revert to some previous settings to make it better at low speed. I believe our downforce is pretty good so it's mechanical grip we're after. Even at Monaco we improved the car, even if it didn't look like it on the timesheets.

In previous seasons the car was good out of the box, while the E22 has required a lot of development. How does that change things in terms of your approach?
RG: It's always easy to go quick when the car is good. You just have to concentrate on your driving. When the car is a bit more tricky you have to think about your driving and what the car is doing, because it can react unpredictably. Add to that all the different systems management we now do in the car, it becomes a real mental test! That's not ideal for Monaco, so it was a very demanding Grand Prix, but at other tracks with more margin for error you can push more. I'm happy we made it to eighth at Monaco and we go to Canada with more confidence.

Pastor Maldonado puts a rather short Monaco Grand Prix behind him and turns his focus to Montreal and the new challenge of the Canadian Grand Prix.

Monaco was definitely one of your shortest races. How frustrating was it?
Pastor Maldonado: I was very disappointed because I was expecting to be in the points and the car did feel strong performance wise. The chances in Monaco are always very high and I was ready to do a great race, but unfortunately it was not to be. As you saw, we were not the only team to have technical problems at the last race, however we just need to work harder to try to solve all of the small issues and get better with each race. They are frustrating, absolutely, but we are getting stronger and stronger each time the car goes out on track.

In terms of performance, the E22 didn't seem to like low speed corners?
PM: It didn't in Monaco, but that is such a unique track. But, yes, we need to work very hard in the low-speed corners. In medium and high-speed corners, such as at Barcelona, we were very competitive. It was only in the last sector in Spain that we were losing a little bit against the other teams because it is the slow part of the circuit. Top speed and slow corners are probably the weakest points of our car now.

Unfortunately Canada has long straights followed by low-speed corners…
PM: It could be a difficult weekend for the team, for sure. We are not expecting to be at the top, simply because of the type of track and how we understand our car and its performance strengths and weaknesses. It's not very aggressive on the tyres either, so we'll see how it is when we head out to track. Anything can happen and our guys are all working very hard to adapt the car to find more traction in the slow corners and squeeze out some more top speed.

Do you like the Montreal track?
PM: It's amazing and I always enjoy being there. Canada is a great race not only because of the track but because of the people who come to support it. There is a great atmosphere all weekend and the city is quite close to the circuit which means there is a great vibe all round. There is also a lot of history to the Grand Prix as well and it has been around for a while - it is one of the great GPs during the season.

You seem to be keeping calm despite the difficult start to the year?
PM: When you have a hard time it is vital to be completely focused on trying to solve the problems. I'm trying to do better from my side and also to help the engineers improve the car. This is a crucial moment for the team, approaching the middle of the season. We need to push very hard to recover what we lost at the beginning. We always knew it was going to be tough to start with, but the key is not to panic, we'll just keep our heads down and quietly work harder, do more and do better to catch up, and overtake the other teams. We're capable of it, there's no doubt about that, and while it's always frustrating not to be on the podium where we belong, this is part of the story. It's very easy to just give up, but I think it will make us stronger in the end. There's a cool quote I heard - 'there's no shortcut to any place worth going'. That's pretty true I think.

How good was the Barcelona test in terms of seeing the potential of the team?
PM: It was super good. To be honest it was my first real test with the team and it was great to work through the full programme and see what the team is capable of in a normal situation. Everything ran well. I felt more confident with the car just because of the mileage and I think the team felt more confident. Monaco wasn't reflective of how much the team has progressed and I'm looking forward to the opportunity to really show how strong we're becoming.

Which other circuits do you think will suit the E22?
PM: Circuits where you need a lot of downforce like Silverstone, Budapest, maybe Hockenheim as well. These kinds of circuits can be more efficient for our car. We're improving every day, so with more time we will be back at the sharp end of the grid and not only at preferred tracks.

What do you want in Canada?
PM: I think it would be good to have a trouble free weekend and finish the race strongly in the points. With the variable weather we've seen there in the past, anything can happen in Montreal, however I would like to see us bringing home some good points for the team. It will be tough as it's going to be such a tricky track for us, however if we can put in a solid performance and get the most out of the car then I think we could be in a good position.