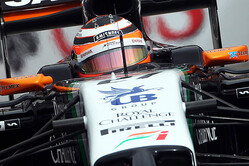 Vijay, ten points in Monaco - another good result by the team. Sum up the race for us...
Vijay Mallya: The car was competitive. We qualified tenth and eleventh, but we felt we could have qualified a few tenths better, which would have put us into sixth or seventh on the grid. Nico drove the car wonderfully well; he conserved the tyres when he had to and defended brilliantly at the end. On the supersofts we did over 50 laps, which is quite incredible. It's just a shame Sergio's afternoon was so short: I would have liked to see what he could have done too.

Nonetheless it must have been satisfying to see the team strengthen its hold on fourth place...
VM: The battle for fourth place is going to be intense as the season develops, but at the moment we are firmly in fourth with 15 points advantage over fifth place. We are now a third of the way into the season and we've shown that we have a car that can constantly deliver whatever the track. We've been in the points in every race, which is very motivating for everyone in the team and helps pump us up even more. There are some strong teams behind us, but we are holding our own and will continue pushing hard.

What are you hopes and expectations for Canada?
VM: It should be a good one for us. However, gone are the days when you can hope to have results simply based on what tracks should suit you. This game has changed too much. There are so many variables in racing that we don't take anything for granted. For example, the weather often plays a role in Montreal and that could reset everything.

Nico, you've scored points in six out of six races in 2014. You must be pleased with that...
Nico Hulkenberg: It's my best run of results in Formula One and I'm really enjoying the racing. I've said many times that consistency is our strength and we showed that again in Monaco with another fifth place. Monaco was not our strongest track, or our weakest track, but we still brought the car home for a great result.

What about those final laps in Monaco. How tough was it to hold on to fifth place?
NH: It was such a hard race. There was pressure from behind and my tyres were gone. Just keeping the car out of the wall was difficult. So it was a big relief to keep Jenson behind. I was shouting over the radio when I crossed the finish line because it was such a satisfying result for everyone in the team.

Looking ahead to Montreal what are your expectations?
NH: It's difficult to say how we will perform in Montreal. In theory it should be one of the better tracks for us, but things change from race to race. It's good that we have the soft and supersoft tyres again because I think the softer tyres are more suited to our car. As an overall event the Canadian Grand Prix is one of my favourites because of the buzz around the city and the unusual track. To get a quick lap you need good top speed, a car that can attack the curbs and you also have to be brave enough to get close to the walls.

Tell us about the Canadian Grand Prix. Do you enjoy the weekend?
Sergio Perez: I really enjoy racing in Canada; it's a very nice circuit which is quick and technical. It feels a little bit like a home race for me because it's not too far from Mexico and there are always quite a few Mexican fans at the race. It's a very cool city as well with a touch of Europe in the American continent, and the food is just amazing.

It's also a track that holds special memories for you...
SP: I have very good memories from Montreal. In 2012 I started at the back of the grid and managed to finish in third place. It was an amazing race and my one-stop strategy worked perfectly. It was my second podium in Formula One and a great feeling - one I hope to experience again soon.

Tell us more about the layout of the lap...
SP: It's another track where you need good top speed and traction from the slow corners. You also have to maximise the limits of the track to be quick and get really close to the walls, so it's easy to make a mistake. It's hard to overtake there, but the final chicane is definitely the best opportunity. As a track, it should be suited to the strengths of our car so we have to maximise this opportunity.

What are your expectations for the weekend?
SP: After a very disappointing race in Monaco, I just want to get back in the car and get the best possible result for my team. Points will be the target.