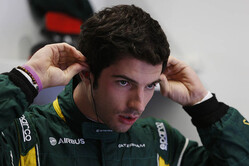 Kamui Kobayashi: "Race seven is Montreal in Canada, one of the most popular races of the year and one where the weather can play a very big part in the race. At the moment the forecasts look dry For Friday, Saturday and Sunday but if that changes it could definitely be in our favour and we need to make sure we're ready to take anything that comes our way. I was in the factory last week to start preparations for Canada and even though Monaco didn't end for me as we'd planned, despite us doing everything we could, everyone is still fighting harder than ever. Crazy races like we had last week don't come too often, but when they do we need to be ready and after talking to a lot of the team last week I know that they are all focused on making progress, not looking back at what might have been.

"On track Canada is a good place to go racing. The local fans are very passionate and knowledgeable - seeing the whole track full on a Thursday with people really excited about F1 being back is great as it shows just what it means to them to have us race in their home town, and that's good for everyone in the sport. I've had a couple of points finishes in Canada in 2011 and 2012 and it would obviously be cool to have the same again this year - as I say, that will probably take a crazy race but if that happens I'll be prepared ready, as will the whole team."

Marcus Ericsson: "This will be my first race in Canada and after everything I've heard about Montreal and the track I can't wait to get started. Even though there were obviously mixed feelings in the team after Monaco, I have to say I was pretty happy with how it went for me. After starting from the pitlane I finished my first ever F1 Monaco GP in 11th, equalling the team's highest ever position and, even with what happened ahead, that could be really important later this season. That sort of finish, in a race where a lot of cars didn't make it to the flag, is all part of my continuing development as an F1 driver, and I'm sure that experience will help me in Canada and for the rest of the season as we keep battling.

"The actual Canada circuit looks like it'll be a good challenge. It's quick, especially for what is almost a street circuit, we run pretty low downforce as there are several high speed sections and one of the main things we'll be working on in the free practice sessions is braking - we need to make sure the brake cooling is optimised throughout the weekend, and watch brake wear, especially in preparing for the race itself. After Monaco I'm definitely ready to get back to work, and it'll be good to start again at another new track and one which everyone tells me is going to be an amazing race weekend."

Alexander Rossi: "FP1 in Montreal will be my first drive of the year in the 2014 F1 car, but after the amount of laps I've done in the sim with CT05 I'm already pretty familiar with how it'll be inside the cockpit! Obviously it's not quite the same as actually being out on track, but I have a lot of F1 mileage under my belt with the various FP1s and test days I've completed and having driven in FP1 in Canada last year I know I can go straight to work and help the team complete its plan for the session.

"I'm grateful to Caterham for their continual support with my development as an F1 driver, in the F1 car again in Canada this weekend and Austin later this year. The chances for young drivers like me to be in current-season cars on track are very limited, and obviously every lap counts over a race weekend but the fact the team sees that I can add value from the work I do in the car, and they can keep helping me to learn, shows great support and how committed they are to developing young talent. Now I'm focused on Friday morning. The weather should hopefully be dry so if that stays true we should have a full session run and be out as the green lights come on - if it rains then so be it, I'll still be focused 100% on the job the team asks me to do."

Main challenges of Montreal for the Power Units: "The internal combustion engine will be highly stressed due to the loads exerted under the heavy braking for the chicanes and acceleration down the long straights. Likewise the MGU-K will be under pressure through the tight corners as drivers repeatedly slow from over 300kph to under 100kph in tenths of seconds. The two long straights will tax the MGU-H, which will be feeding the turbo and ICE, since a strong response under acceleration and minimal lag as the turbocharger gets back up to speed will be critical to minimising lap time."

Main energy recovery points: "The two hairpins at either end of the lap (Turns 2 and 10) are the two biggest stops of the lap, with the cars slowing from high speed to second gear. The MGU-K will therefore have plenty of opportunity to recharge the battery. The long straights will also give the MGU-H a chance to recover energy from the exhaust, since the ICE will be at full throttle for just over 50% of the lap."

Difficulty rating: "The Ile de Notre Dame is one of the toughest challenges for the new Power Units so far this year - every part will get a thorough workout."

What to watch out for: "The wall of champions at the end of the lap will need precise torque delivery to avoid a collision while the chicane at the end of sector one will require stability under braking and acceleration."