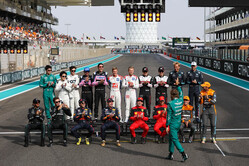 As he brings down the curtain on an F1 career spanning 16 seasons and 299 races, Sebastian Vettel admits that final race left him feeling "a bit empty".

Having looked strong for much of the weekend, Vettel looked set to sign-off in style and though he finished the race tenth, he believes that a different tyre strategy would have paid off as he sought to help Aston Martin leapfrog Alfa Romeo in the team standings.

"I wish it could have been a couple of more points, but I enjoyed the race," he admitted. "I think it was a bit of a different warm-up today, to get into the race, but once the lights go off, it's full-on race mode.

"I think we didn't go for the best strategy," he continued, "so it was a shame, because maybe we could have turned the Constructors' Championship around for us, but overall it's obviously a big day."

In the opening phase of the race, the German battled the Alpine pair, with Fernando Alonso subsequently admitting that he didn't push the four-time world champion too hard because: "I just wanted to do a few laps behind him and enjoy."

"I could feel that a little bit," said Vettel. "He was very, very generous in the beginning of the race. After that, obviously the Saubers fought very, very hard because they wanted to defend the constructors'.

"It was a shame I was stuck behind Esteban in the beginning because I felt I had better deg, but then we stayed out way too long and lost so much."

It was very much Vettel's weekend, with dinner with his 19 colleagues at the start of the weekend - paid for by Lewis Hamilton - and various tributes including a group walk of the track, a pre-race guard of honour, and 'Danke Seb', T-Shirts, flags, banners and stickers wherever you looked.

"It's been very special for me to have that kind of farewell," he said. "I had a great time, all these years, and was able to enjoy success, win championships, so from a sporting point of view, it's been huge. But also I've been able to grow and mature in many ways, and reflect about a lot of things. So it's been obviously always the same rhythm, season by season, but nice."

Interviewed on the grid at race end, the German was asked by Jenson Button if there was a message he would to leave.

"Well, I don't have that much more to say," he began. "I feel a bit empty, to be honest, it's been a big weekend. But I can only repeat, you know: I think the last two years have been very, maybe disappointing from a sporting point of view, but very, very useful and important to me in my life, a lot of things happened. A lot of things that I realised. I think it's a huge privilege being in the position that we are in and with that comes some responsibility. So I hope to pass on a little bit to the other drivers to carry on some of the good work. It's great to see that, you know, we have the power to inspire you with what we do and what we say. So I think there are far bigger and far more important things than racing in circles, but obviously it's what we love and through that if we can transfer some of the really important values that's big.