Alonso happy to end the Alpine chapter of his career 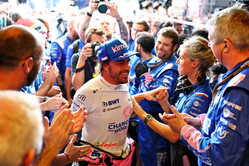 Much like his return to McLaren, Fernando Alonso's second stint with Renault/Alpine ultimately ended in disappointment.

Though he has certainly given 100% and thrilled fans with his performances, the two-time world champion finishes the 2022 season tenth, 11 points down on his teammate.

In a season in which the Spaniard has constantly questioned the reliability of his car, especially compared to his teammate, Alonso was the Abu Dhabi Grand Prix' only official retirement as he suffered yet another water leak.

"Unfortunately another engine problem,” he said at race end. "Another retirement for us today after we were fighting for the points and looking quite comfortable.

"It's the way it is," he added. "It's been a little bit the summary of the year. Unfortunately on car 14 these things always seem to happen. So one more.

"Six DNFs!" he exclaimed. "There are facts that this year they've been against us a bit in car 14, but also others which didn't count as a DNF like Australia in qualifying. The sprint race in Austria, I didn't even start the race. Things like that.

"I think there are nine or ten reliability issues which at this level is not acceptable and they all happened to my car," he sighed. "It's been a very unlucky season in terms of... not unlucky... I think we were not prepared reliability-wise.

"So I'm happy to happy to finish this chapter and start tomorrow the seat fit with Aston Martin, Tuesday the tyre test and hopefully a new project with more luck.”

Despite his criticism of his team - a rarity for the Spaniard - Alonso holds no bitterness for the outfit with which he won his titles.

"Even though it's goodbye to the team after this weekend, I will always think of Alpine with good memories," he said. "I spent nine years of my life with this team and won two championships in the past with Renault, so I wish them well for the future.

"The project is amazing," he continued, "what they are doing in terms of recruiting people, facilities, investment, so I think good times are coming. But I cannot wait for next year."