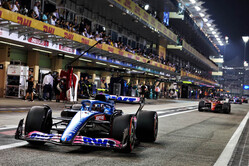 BWT Alpine F1 Team will line up with Esteban Ocon in eighth and Fernando Alonso in tenth on the grid for tomorrow's Abu Dhabi Grand Prix, the 2022 FIA Formula 1 World Championship season finale.

Qualifying was hotly contested under the lights at Yas Marina Circuit with tight battles to progress through each segment of Qualifying. Fernando was able to go through Q1 by just 0.052secs but later fell on the wrong side of a tenth of a second as he missed out on Q3 by only 0.028secs. While the Spaniard qualified in eleventh, he will rise one grid spot to tenth as a result of Daniel Ricciardo's grid penalty.

Esteban made it his eleventh Q3 appearance of the season as he set his sights on pipping both McLarens and Sebastian Vettel in the top ten shootout. After an initial run on used Softs, Esteban was able to improve to a lap time of 1min 24.830secs on a new set of tyres to qualify in eighth, just 0.061secs from Lando Norris in seventh.

Esteban Ocon: "I'm very pleased with today's Qualifying so a big well done to the team for one of our best sessions of the season. Every run felt like we made a step as we tried to maximise the performance of the car today. Our main competitors are quick this weekend, perhaps quicker than we originally thought, so we will need to be focused tomorrow to have a good race and bring back some points. There's one more to go, so let's make it the best one yet."

Fernando Alonso: "We didn't quite have the pace in Qualifying today, so in the end, I think we can be quite happy to be starting tenth for the race. It was close in Q1 and less than a tenth separated a number of cars in Q2. We know it will be difficult to overtake tomorrow, but we'll try our best to have some fun and gain some places inside the top ten. It's the last time I will jump in the car with Alpine, so I will be looking to make the most of the race tomorrow and hopefully end on a high with the team."

Alan Permane, Sporting Director: "We will start tomorrow's final race of the year with Esteban in eighth and Fernando in tenth and we're generally quite pleased with those starting spots. Fernando didn't quite extract the most from the car today - missing a tenth or two throughout - and his focus is already on tomorrow's race where we know we are strong. This circuit has always been quite tricky for Qualifying with cooling track temperatures and traffic as cars queue in the final sector, which brings difficulties in keeping the tyres in a good window. Esteban and his team did a great job in managing those elements today to qualify in eighth place and he was close to sneaking seventh by just half a tenth of a second. We're looking forward to tomorrow's race where the aim is to utilise our strong race pace and have both cars well inside the points to end the season on a high note."

Check out our Saturday gallery from Yas Marina here.