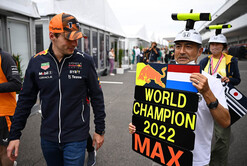 Following a "messy" weekend in Singapore, Max Verstappen is hoping for a "perfect weekend" at Suzuka as he eyes second title.

The world champion had an unusually difficult weekend at Marina Bay, angrily reacting after being told to abort his final lap in qualifying, and finishing 7th next day following an anti-stall issue at the start and a mistake whilst battling Lando Norris later in the race.

Having failed to wrap up the title last weekend, Verstappen would like to put it to bed this time around, admitting that to do so would be given extra meaning given that it is Honda's home race.

"It would make it a little bit extra special because of our relationship with Honda," he admitted. "I think it was already a shame that we couldn't be here last year already in a title fight, so that's why we're really looking forward to being back here.

"We'll see what happens," he said of his title hopes this weekend. "We need a perfect weekend, that's for sure.

"It would be very nice if it happens here," he added, "but if it doesn't happen here, I will be even more in favour the next race. It doesn't really change anything. You want to have a good weekend and try to maximise everything you can, and of course I need a perfect weekend to be able to clinch the title here but, to be honest, I'm not really thinking about it too much."

Nor, seemingly, is he thinking about the budget cap row.

"To be honest, I'm not really busy with these kind of things," he said. "It's up to the teams and the FIA, I just need to focus on the driving. There's not much more to say on that. I guess we'll find out on Monday."

Asked about his meltdown after qualifying in Singapore, he said: "It's not rocket science, I mean, just pay attention to the fuel level. When you fuel the car for five laps, you can do five laps; you're not going to do six laps. You can talk about it for hours but it's not going to suddenly change anything.

"It's not just that," he continued, "we had a very poor Friday in terms of amount of laps. Also, there are a few things went wrong because we made changes to the car, we couldn't test as well because it's wet, and carried that onto the race. So a very messy weekend and I think that was just a prime example of how you don't want a weekend to go. You learn from that."

Asked if he is happy to be back in Japan, he said: "Yeah, the fans are very passionate, crazy... but in a good way, and they really dress up for it as well. You see quite a few people walking around with a DRS rear wing on their head for example.

"It shows you how popular motorsport is, in general, in Japan. I arrived in Tokyo, turned on the TV and the first thing that popped up was racing, again, a different category, but still. Great culture, and I think that's why we all love coming here."