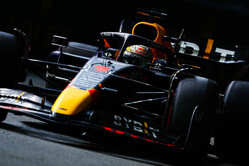 World champion is left seething after being told to abort possible pole-winning lap due to fuel fears.

As if Red Bull didn't have enough to deal with, in the final moments of today's qualifying session the team was subjected to an expletive laden tirade from its star driver.

No sooner had Fernando Alonso secured provisional pole than Charles Leclerc responded with a faster time. However, all eyes were on Verstappen who had gone quickest in the first two sectors.

However, in the final sector he eased off after making a mistake and subsequently prepared for a final stab at pole.

As he began his final flyer, the Dutchman had slipped to eighth, but a front row position beckoned as he set a blistering pace around the Marina Bay track.

However, as he entered the final complex of corners he was told to abort the lap, he didn't take it well.

As he pulled into the pitlane, now condemned to start from the fourth row, the rant continued.

"We'll talk about it later," was the reply.

"I already felt it was on the lap before as well, but then they told me to abort so I said OK we can do that but then on the final lap they told me to box and then I realised what was going to happen. We ran out of fuel," he told Sky Sports.

"It is incredibly frustrating and it shouldn't happen," he continued. "Even when you under fuel it or don't plan to do those six laps then at least you track that throughout the session to know you aren't going to make it. We should've seen that way earlier.

"I am not happy at all at the moment," he admitted. "I know of course it is always a team effort and I can make mistakes, and the team can make mistakes, but it is never acceptable. Of course you learn from it but this is really bad. It shouldn't happen."

"It was a miscalculation on our side," admitted team boss, Christian Horner. "We fuelled the car for five laps, but because the track was ramping up so quick, we got an extra lap.

"Obviously it's critical to give the fuel sample so it's the hardest call in the world when he's two-and-a-half seconds up on his lap time. But if you don't give the (fuel) sample you're starting from the pit lane.

"It's frustrating, but there great pace in the car," he added. "We made it harder for ourselves qualifying eighth but we'll give it everything, and these cars can actually race."

"It is a bit like Monaco," sighed Verstappen, "it is super hard to pass and you can maybe do a little bit with strategy, but at the moment I am not really in the mood to think about the race tomorrow.

"Once I jump in the car, I will always give my very best but at the moment I am just super frustrated with what just happened. I will go back to the hotel and think about other stuff."