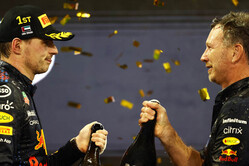 Christian Horner has reacted following claims in the German media that Red Bull over spent the budget limit in 2021.

Before a wheel had turned in Singapore today, the paddock was buzzing amidst speculation that Red Bull's 2022 title - possibly even its 2021 title - could be under threat.

According to Germany's Auto Motor und Sport, the Austrian team may have overspent the 2021 budget limit of $145m, the publication claiming that Aston Martin also exceeded the limit.

Christian Horner was quick to dismiss the claim, telling Sky Sports: "The accounts were submitted way back in March, so it's been a long process with the FIA, going through and we're in that process as we speak.

"So they're rightly following that process," he continued. "I think mid-next week is when they declare their certificates.

"I think that our submission was below the cap and it's down to the FIA, obviously, to follow their process, which they're currently doing," he added.

"Every team, theoretically, is subjected to it so they will have looked at every team's submitted account. They're following a process and that conclusion date has been moved from July to September now to October. It's a big job, it's a lot for them to get through.

"There's always going to be rumours," he insisted. "I've heard of major breaches or whatever, I'm certainly not aware of that.

"Inevitably it's a brand new set of regulations and a set of very complicated regulations," said the Briton. "So how rules are interpreted and applied, inevitably you're going to be subjected between the teams. I'm sure as the years go by things will get tidied up but we're confident in our submission and as I said the FIA are in a process.

"You have to remember this is the first time this has ever happened. But we do our due diligence, we get audited anyway, it's a similar process, to that of working with an auditor. It's slightly bespoke to Formula 1.

"Clarifications have been coming even after the submissions were made so you can see how immature the process is. But the FIA obviously has been working hard on it and doing the best they can."

Reacting to the media reports, a spokesman for the FIA said: "The FIA is currently finalising the assessment of the 2021 financial data submitted by all Formula 1 teams.

"Alleged breaches of the Financial Regulations, if any, will be dealt with according to the formal process set out in the regulations."

The sport's governing body is expected to announce its findings after analysing the teams' 2021 budgets, next week, but in the meantime it is the punishment that could be meted out that is causing a buzz throughout the paddock.

Essentially, in exceeding the budget limit, the FIA sees anything less than a 5% overspend as a 'minor' breach, while anything beyond that is considered 'major'.

Though the penalties are not set in stone, it is believed that a minor breach could result in championship points being deducted, limitations on aero testing and a reduction of the cap in subsequent years.

However, a major breach could mean exclusion from the championship, a move which could place the 2022, and even the 2021 world championship result, in doubt.

"The cost cap is probably the most important evolution of regulations in order to keep a level playing field," said the Austrian. "and to allow teams that haven't got the full budget to catch up and to put the ceiling onto the spending of the top teams. So it is of huge importance for a demonstration that these regulations are policed.

"I have no reason to believe otherwise," he added. "The FIA, particularly Mohammed, have shown a pretty robust stance on enforcing all kinds of regulations. So I think if we're talking now about something big, he will show the same integrity and leadership that he's done before."

"Obviously being in breach in one year, means you're probably in breach of a second year, and potentially a third year," he added.

"And once that is clarified, I'm sure lots of discussions are going to take off about what effect it would have.

"But it's too early at this stage to comment," he added, without a hint of irony.

And to think Domenicali and the boys are still looking for 'added spice'.