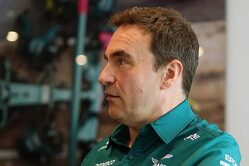 One of several 'big name' signings at Aston Martin, Dan Fallows is predicting a "big step" for the Silverstone-based outfit next season.

The Yorkshireman is one of the 'A team' recruited by Lawrence Stroll as he seeks to take Aston Martin to the front of the grid, the subject of a high-profile dispute with Red Bull that eventually saw the matter settled out of court.

Finally able to come in from the garden, Fallows is chomping at the bit, though keen to be out of the spotlight that shone brightly following his controversial move from Milton Keynes.

"It's really embarrassing," he admits in an interview for the team's website, "especially when you've got friends sending messages with links to articles about you. I've never really been interested in this sort of thing, I'm not in it for the publicity. All I'm interested in is making fast cars."

Senior aerodynamicist at Jaguar, he remained with the Milton Keynes-based outfit when it was bought by Red Bull in late 2004, rising to the position of head of aerodynamics in 2014.

He likens his first impressions at Aston Martin with the early days of Red Bull.

"One of the most exciting parts of the Red Bull journey was when the team evolved from Jaguar," he says. "A small team with a very limited budget suddenly had significantly more budget, more resource, and more technical strength right at the top of the organisation.

"Watching the team grow, being part of that growth, being part of the success, even making mistakes along the way and learning from them, it was incredibly exciting," he adds. "What's happening at Aston Martin F1 right now feels very similar to what happened at Red Bull then."

As was the case in those early days at Red Bull, Fallows has his work cut out - though at least he doesn't have to suffer the embarrassment of the Formula Unas, who would never be allowed in this new woke era of F1.

The AMR22 has been a disaster, and as a result the team is languishing in ninth in the constructors' standings.

Fallows admits that from the moment he first saw the car he knew 2022 would be a struggle.

"It was clearly quite different from the Red Bull philosophy," he admits. "Having worked on the Red Bull car in its initial stages, roughly half the aero development work had been done by the time I left, I have a pretty good understanding of what they've done and how they've approached things.

"I wouldn't go so far as to say I looked at the AMR22 and thought it wouldn't be quick," he makes clear, "but I did think it would be a challenge to achieve the kind of performance Red Bull were going to achieve with the concept of their car.

"I was curious to see the thinking behind the AMR22 philosophy, but in fact by the time I arrived the team had already concluded that they needed to pursue an alternative design solution."

Despite a significant upgrade for the Spanish Grand Prix, the team has continued to struggle, the highlight being Sebastian Vettel's epic drive to sixth in Baku.

Fallows is convinced he will be able to give the Spaniard a better car than that Vettel had to deal with.

"We believe it will be much more competitive than this year's car," he says. "I'm confident we can make a big step forward, because when I look around the car, there are areas of improvement absolutely everywhere.