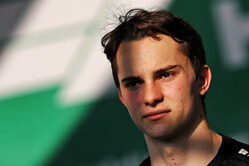 Christian Horner has admitted that he regrets not signing Oscar Piastri to Red Bull's young driver programme when he raced for his own team, Arden.

Founded by Horner in 1997, Arden has run teams in F3000, F2, Eurocup Formula Renault 2.0, the F4 British Championship and GP3, many of its drivers having been Red Bull juniors, among them Sebastien Buemi, Carlos Sainz, Vitantonio Liuzzi, Daniil Kvyat and Jack Doohan.

Another driver that raced for Arden is Oscar Piastri, who finished runner-up in the 2017 F4 British Championship with the British team, and subsequently contested the Formula Renault Eurocup also.

The wrangle over Piastri having dominated the summer break, Horner admits that he regrets letting the Australian slip through his fingers.

"He drove for the Arden team in Formula 4 and Formula Renault, and was obviously a significant talent," he tells the official F1 website's Beyond the Grid podcast. "There was an opportunity for Red Bull to look at him at the time, and we didn't take up that option, which is something that I regret.

"What he went on to achieve is phenomenal, in Formula 3 and Formula 2," he admits. "If he'd have been a driver here, there is no way that he wouldn't have been under lock and key for a period in time.

"As I say, I wasn't party, it's difficult to judge what was promised or reneged on or so on. But certainly, it was unexpected, probably from several areas."

While the row has left Alpine considering the worth of its young driver programme, it is business as usual for Red Bull.

"We're continuing to invest in youth," says Horner, 2we've got some great youngsters in the programme, all the way from karting and stepping into Formula 4 now, upwards.

"It's something Red Bull has done so well, giving these kids a chance, investing in young talent, and giving opportunities they otherwise wouldn't have had.

"Isack Hadjar in Formula 3 this year has had a great debut season, Iwasa in Formula 2 has been a standout, they're just two of the guys on the programme.

"Liam Lawson has had a tough year, but he's again another talent. Dennis Hauger has been a bit underwhelming in Formula 2 after such a dominant year in Formula 3. But again, how much of that is him and how much of it is equipment?"