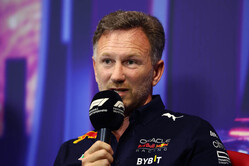 Fred, let's start by discussing some news that broke last week regarding your second driver for 2023. What convinced you to retain Zhou Guanyu?
Frederic Vasseur: So far, he had a very good season from the beginning. But in terms of pure performance, that the target was to do some Q2 and he did Q2 on the first event, he scored one point on the first event also. On the top of the performance, I would say that the human side was crucial because he did a very good job with us. He is a strong team player and it was important for us at the end of the day. I think it's the right choice to continue.

In what areas has he improved the most as the year's gone on?
FV: It's not just about speed, for sure. When you come from F2 and you have to learn some tracks at the beginning of the season, it's always a bit difficult, but I think he improved quickly into the season in terms of pace. Now it's more about the technical side: how to approach the weekend; how to manage the weekend. And sometimes he's a bit prudent on the first couple of laps but now we know him, we know that he's about to do the step and I'm quite confident for next year also.

And where would you like to see him grow next year?
FV: For sure we have to do a step but, you know, in our business we have to improve everywhere and at every single session but for sure we want to be faster and it's just not just about Zhou or about Valtteri. We have also to do a better job on your side but the commitment from Zhou is always a good one. This is the most important: the mood into the team is good and he's part of this, and the combination with Valtteri is the perfect one. Now, for sure we have to improve in terms of performance but as everybody - and if you ask the same question to my colleagues, they will have the same answer.

Let's bring it on to this weekend now. Yesterday looked good. What lessons have you learned since Monaco that's been able to help you here?
FV: You can't compare Monaco and Singapore - I think the car is completely different but everybody is improving and even if the rate of development is probably a bit lower this season, but the car is different compared to Monaco and Monaco was a bit special. I think that we made a mistake and we lost the FP1 and part of the FP2 and we were late from the beginning of the weekend and this was very difficult to manage. It was probably that the results were a bit under our expectation. But I think the pace was decent. It's just that we are late compared to the group and the group is so tight between P6-7 to P18-19 that sometimes you can lose the weekend like this.

Laurent, Ferrari were winners last time out in Singapore and yesterday looked good. How confident are you of a repeat win this year?
Laurent Mekies: Well, you're right: 2019 was a very good memory. It was a tight fight at the time with Mercedes and it was very good to ultimately put both our cars up there. It's a very different picture this year: it's going to be a three-way fight as it has been in the last few races. So, we expect not only Red Bull but also Mercedes to be in the fight for the win with us this weekend. So, it's still a long way for a repeat of the performance but you know, it's the sort of fight we love, and we are here for that.

Charles didn't have the smoothest of days yesterday, he lost quite a bit of track time. Do you feel he's going into qualifying on the back foot?
LM: Well, Fred has mentioned it earlier, on this type of track, like Monaco, like here, you don't want to lose track time. Unfortunately for various different reasons that's what happened with Charles yesterday. Nothing he could do about it, but he's very experienced now. We will try to play catch-up a little bit today with FP3 programmes, a bit more time on the track for him hopefully. If the weather allows, and I'm sure that by the time qualifying comes and the race comes, he will be fully up to speed.

Now, let's look at the bigger picture. Ferrari, are lying second in both championships but a long way behind Max Verstappen and Red Bull. What are the goals for you guys in these last six races?
LM: You know, it's very important that we keep improving. And that's what we have been saying all year long. We've made a great step this year, but we are perfectly aware that there are more steps to come. And we are using every single race to improve as a team, to improve on how we deliver and how we execute, and how we work together. And these last six races are important for us to do further steps to bring some good dynamic into the winter and to continue to move on.

And where's the focus at the factory right now? Charles said he wants it to be on 2023. Do you agree with him?
LM: You know, I think it's right. You know, I think it's probably the focus of most teams right now. So certainly, as far as we are concerned, as far as development of the car is concerned, yes. So the focus is now on 2023. So it's a fair thing, it's two flows that goes in parallel: on one side, the focus at the factory looks at the 2023 car development. On the other side, at the racetrack. As we said, we want to fight for the wins, we want to take every single opportunity to become a sharper team.

Guenther, coming into this weekend, you hoped that the slower corners here at Marina Bay would suit your car. Was that the case yesterday, which you described as 'flawless'?
Guenther Steiner: No, I didn't say the slow corners were our advantage. I think it's the fast corners. It's not the straight lines, but the slow corners are not an advantage to us. But no, yesterday, I think moving on for Monza here it suits the car better, as I said, But yesterday, I mean, the most important thing for us was to do a lot of laps. Kevin hasn't been here since two years and Mick was never here, so I think the most speed you can find, specifically for Mick, is being out on the track. And therefore, that's what we focused on, to do as much laps as possible, and then obviously always want to be fast. But that was not the main focus yesterday, we just wanted that he gets a good feeling, that he gets a confidence level, because he was never here, because as we all know, if it goes wrong here, normally it doesn't go easy on you. So that's what we achieved yesterday, therefore it was flawless.

What about the goals for the rest of the weekend?
GS: To improve. Like we all want to do, as was said before by my colleagues, we want always to improve and hopefully we can make some points. That is now the goal, every race.

Another fastest lap for Kevin?
GS: I'm not so sure about if he can do that again but for sure he will be trying.

It's very tight in your area of the Constructors' Championship, you're just one point ahead of AlphaTauri now. Who do you think has the faster car between you and them?
GS: I don't know yet. I mean, it's very tight in the midfield, we don't know yet who's got the faster car. I think now it comes on who does a better job on the next five and a half weekends. That team will finish up seventh. And, I wouldn't count out Aston Martin. They were good yesterday, you know? So, there's quite a big fight for seventh place at the moment out there. But, I don't think anybody's specifically faster. It's more like you need to have a perfect weekend to score points because the big teams normally don't make mistakes or don't have any issues any more in the race, so we all know that the first eight places are gone and we are there to take the scraps basically, and who can get them, who takes the crumbs, will be in seventh place.

Final one from me, concerning your second driver for next year. You're taking your time to decide who that's going to be. Why is that?
GS: Because we're not in a hurry. And there's not a lot of things moving. So why should I be in a hurry?

But are you worried that you're going to miss out on opportunities if you don't make a decision soon?
GS: No.

Well tell us what you're looking for in this second driver? What are you analysing? What do you need? What does Kevin need alongside him?
GS: That is what we are looking at. It's a little bit... What do we need to do to get the team better, to help ourselves? What kind of drivers? We just want to see how Mick is doing. There's a lot we are watching. We are not just sitting there doing nothing, we are seeing what is happening and we know we want where we want to go: we need to get a stronger team for next year and for the future. So that is why we are waiting. So, as I said, there is no hurry and we are thinking it properly through. The only thing we don't want to make, maybe next year, saying we made the wrong decision because we didn't follow through enough, you know? And not having the pressure to do anything - because I don't think there is a lot of opportunities out there anymore, and we will not miss any of them - we are not in a hurry.