This is not what I enjoy, admits Verstappen 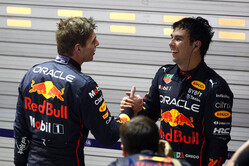 Still unhappy with the call that he believes robbed him of pole for the Singapore Grand Prix - even though being unable to provide a fuel sample would have dropped him to the back of the grid - a difficult race did little to improve Max Verstappen's mood.

Starting from eighth, an anti-stall issue saw him drop to 12th, and though he battled his way back to fifth, while fighting with Lando Norris for fourth a bold move on Lap 40 from the Dutchman saw him carry too much speed, lock-up and head down the escape road, damaging his tyres in the process and necessitating a second stop for fresh rubber.

Rejoining in 12th, he made his way back into the points, finally finishing seventh after late moves on Lewis Hamilton and Sebastian Vettel.

Asked if he took any pleasure from the race, the world champion was adamant. "Zero," he replied. "This is not what I enjoy."

Talking about the mistake as he battled Norris, he said: "I tried to go for a move on Lando but somehow I completely bottomed out as soon as I hit the brakes, so the front wheels went in the air and I must have really locked-up because I had massive flat-spots. So I had to pit again and put new tyres on.

"I got back in the points, but it is of course not what we wanted and after yesterday we cannot ask for miracles."

Asked about the start, he said: "I dropped the clutch and had anti-stall, so I need to analyse why that happened. Then, of course, you lose a lot of spots.

"From there onwards I tried to pass a few people, and some worked, but then you get stuck in a little bit of a train. Everyone has their tyres quite up to temperature, so it’s really hard to follow.

"We are still 104 (points) in the lead," he continued, "but it is just a very frustrating weekend. I can of course say it doesn't matter, we have five races left and we have a big lead, but I want to have a good weekend every single time and we had a really terrible weekend. It started, of course, yesterday with the big **** up in qualifying."

Indeed, such was the Dutchman's anger on Saturday that he left the circuit shortly after qualifying, failing to attend the team's debrief.

"I wasn't in the mood to talk," he admitted. "It's not about making a statement, it is just how I feel. It wouldn't have been much use to talk."