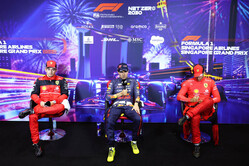 Q: Carlos, obviously on the podium today, third, looked a pretty tough race. How was it for you?
Carlos Sainz: Yeah, very tough out there and never really got into a rhythm in the wet and then, yeah, couldn't challenge the top two guys because I was always struggling a bit more with the rear, with the car. So, in the end, in these conditions, when you don't have that extra bit of confidence I had to settle a bit for P3. The good thing is I didn't do any mistakes, I could bring the car home and I could be quick towards the end of the race when I managed to build a bit of confidence - but yeah, good result for the team for the Constructors' Championship. A shame that we couldn't get the win.

Q: Like you say, you take it. Were you surprised how long it took to dry? I know yesterday we saw the similar conditions in Qualifying but you would have thought in the race it would have went a bit quicker.
CS: Yeah, it's crazy how long it takes here to dry. I don't know but we keep doing laps, and you keep looking at the track and the dry line never appears in some places, and it keeps sliding a lot. But it's definitely something to keep in mind for the future because this track is pretty unique on that.

Q: Charles, that's going to be a frustrating afternoon, obviously lining-up in pole position, following Checo the whole race - but you have to say you pushed all the way to the end. It just wasn't quite enough, was it?
Charles Leclerc: Yeah, I pushed all the way. I mean, the bad start put us on the back foot and after that it was a really difficult race after that.

Q: What happened at the start? Where did you lose the momentum? Because it looked like you made initially a good start but then lost out in the second phase.
CL: I had a little bit of wheelspin and lost the performance there.

Q: And physically, how was the race?
CL: Difficult! Difficult - now a good night's sleep and we'll get ready for Japan.

Q: Checo, four-time race winner. I think that has to be up there with your best-ever drives in Formula 1, with the pressure you dealt with, with Charles all the way through that, to keep the car on the track at the end in those drying conditions.
Sergio Perez: Yeah, it was certainly, I think, my best. My best performance. I controlled the race, although the warm-up was very difficult. The last few laps was so intense. I really... I didn't feel it that much in the car but when I got out of it, I felt it. You know, I pushed. I gave everything for the win today.

Q: You're under investigation for a Safety Car infringement. Are you aware of what happened? I know the team told you to make sure you extended the gap - but do you know anything you did wrong?
SP: No, I have no idea what's going on. They just told me I was under investigation, so increase the gap, and it's what we did.

Q: And obviously keeping the championship alive, obviously with Max where he finished you take it into Japan - but with momentum on your side.
SP: Yeah. I think it's nicer for Max to get it in Japan, and for the team. Would be very special for Honda. So, yeah, all in all a fantastic day.

Q: Checo, what a race, you've just led every lap of the Singapore Grand Prix. How good does that feel?
SP: It felt great. It was such a good start, first of all, which really, was great, you know, to really do the first... I basically felt that I had the race on the first section, on the Inters, under control. I could really do what Charles was doing, and open-up the gap. If was important to make sure we had good tyre life. I honestly was expecting the track to dry-up earlier than it did. I think if George wasn't out there, there will be a lot more people going earlier. But at the same time, I mean, it was such a tricky race. I think the keys to the race today was to control the pace on the Inter, have good pace when we need it, and the second one was to survive on the slicks in the beginning, because we were with extremely poor conditions. I think sometimes people, when they're looking at you, underestimate how hard it is, and how easy it is for us to make a mistake. We basically were going to few places where it was properly damp, properly wet and it was super, super tricky, to make a mistake. I had a lot of moments, so first of all, I'm really happy I finished the race. But secondly, to win this race. It's super special.

Q: You said earlier that you think this is your best drive in Formula 1. What made this one so special?
SP: I think how intense it was, you know? To keep Charles behind, especially after the restart, when the warm-up was super hard and we were going basically... half the track was on the dry side but the other half was good enough for Inters - and we were on the slick. So not to make a mistake, and control Charles, who was really strong in the early phases. But then, I think the pace I had in the last few laps was really strong because to basically be able to have that was really, really strong.

Q: Charles, brilliant job by you as well, though I'm sure you're feeling a little frustrated. Does this feel like 2019 all over again?
CL: No, no, every race has a different feeling. But the frustration is there, obviously. I mean, the pace was really good today. Unfortunately, we had a bad start and from that moment onwards we were a little bit on the backfoot. I tried to put quite a lot of pressure on Checo. But yeah, you overheat the tyres pretty quickly, and then you drop a little bit. So it was very difficult to stay always on the gearbox of Checo. But the performance was there. I also think that the choices we've made today were the right ones. And as I've said before this weekend, no, I want to use these last few races for us to get better on the execution of the race, especially, and I feel like it's a step forward this weekend. We need to do other steps forward. But it's a good step in the right direction. And on that I'm happy. But of course frustrated with the second place today.

Q: You've said it came down to the start. Can you just talk us through what happened in those first 200 metres?
CL: Well, I don't really know yet, whether it's me who did mistake in the way I do things or if it's something else, we'll have to analyse it. The only thing I felt is that I had a little bit a bit of wheelspin, and lost it and I saw Checo had an amazing start. So yeah, that's the way it went. But it's like this.

Q: The car seemed to come alive on slick tyres in the second half of the race. So you had more pace than Checo at that point?
CL: At the beginning, yes, but I pushed quite a lot. And then in the last 10 laps, I think he started to pull away again. But overall, I think the performance was also good on the inters, it's just that obviously it was not super wet, so the tyre temperatures will go pretty high and then I will lose quite a bit of grip whenever I was behind him. But then after Safety Car, we will always be pretty strong. But I think there's also things that we can analyse from this race because Red Bull seems to be very, very good after six, seven laps. We are very, very good in the first six, seven laps. And we'll look into that.

Q: Right. Well done to you. And Carlos coming to you now. It looks like a slightly lonely race for you. How tough was that?
CS: Yeah, it was unfortunately quite lonely for me because I just didn't have the pace. Today on the intermediate tyre, I lost a lot on the road to Charles and Checo. I couldn't keep up with him. I was struggling quite a lot on these tyres. I think I lost quite a bit the front and I was having a lot of moments, a lot of front locks, and every moment here costs you confidence and costs you the ability to recover that pace. Yeah, at one point I had to settle a bit and recover that confidence because I couldn't keep up and once the confidence recovered in the slick and towards the last 10-15 laps. I managed to be quick but it was just way too late.

Q: Okay, quick at the end, you also made a great start. Just talk us through that and the run to Turn 1 with Lewis Hamilton?
CS: It was a good start. I think as good as it gets in the wet to be honest because I felt like me and Checo pulled away together and yeah, I could get Lewis and then he obviously tried to get me around the outside, but you're not going to get me around the outside so easily, no, because it's a bit my corner at that point and glad that we didn't have any issues on the car or at least it didn't feel like it and we could keep the position and then it was all about managing the gap to him because it was clear for me that in order to catch the guys in front I had to take too many risks.

Q: This is the first time we've had two Ferraris on the podium since Miami. Do you agree with Charles that the team has executed a good race weekend, on your side of the garage?
CS: Yes, yes, it's good news to see that the race was well executed on both sides. There still things I'm convinced that we need to keep improving and do better. But the team is taking massive steps forward. And we're learning from every situation. And as Charles said, you know, these last five races, or these last six counting with this one, they are going to be great preparation for us in order to be better at the front next year, because it's clear that the car is there, the drivers we're there, we just need to keep improving the execution and whenever we have the opportunities, nail them.