Latifi gets a penalty for Japan 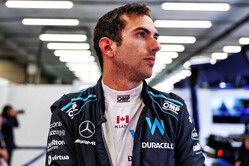 Nicholas Latifi has been handed a 5-place grid penalty for next weekend's Japanese Grand Prix.

The Canadian was penalised as a result of his clash with Guanyu Zhou on the sixth lap of today's Singapore Grand Prix.

Having reviewed the video evidence, the stewards determined that Latifi was predominantly to blame for the collision.

Zhou was attempting to overtake the Williams driver on the straight approaching turn 5 and had sufficient room, taking the normal racing line.

However, Latifi pulled to the left, not leaving a car width to the Alfa Romeo driver and resulting in significant contact between the cars.

Zhou was out on the spot, while Latifi made it back to the pits before retiring.

"From the previous corner I had looked in the mirrors to see where Guanyu was," said the Canadian. "I didn't see he was there, so I took my normal approach for the racing line on the following corner.

"I don't know if he was in a blind spot of the car where the mirror can't pick up," he added. "Unfortunately, he was there and in hindsight I needed to leave more room, but I can only go off what I can see in the mirrors.

"The aim was to see the chequered flag and learn from the experience with it being my first race here, however the incident caused suspension damage which forced us to retire the car."

"It's disappointing to finish a race with such a crash, there was not much I could do," said Zhou. "I was side-by-side with Latifi in turn four, and he decided to fully close the space and put me into the wall.

"The damage to the suspension was terminal, he got a penalty for this incident but it's not going to change much for me. It was not what we wanted, and it's especially annoying as I think we had a decent pace."

Handing Latifi a 5-place grid penalty for next weekend's race, the stewards also gave him two penalty points, bringing his (12 month) total to 3.