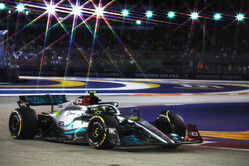 Ahead of today's second session, the air temperature is 29.2 degrees C, while the track temperature is 33.4 degrees. Humidity is 77%, though there is a 10% chance of rain.

The McLaren upgrades are only available for Norris this weekend, but going by FP1, when Ricciardo was 12th and the Briton 19th, the Australian might not think that a bad thing.

Feeling conditions in FP1 were not representative of qualifying and the race, Alpine opted not to run its new floor in FP1.

With a track that hasn't been used since 2019, new cars and new tyres, it is not surprising that there were a number of near misses earlier, including Russell and Sainz, though only Stroll actually came to grief necessitating a red flag.

The lights go green and, as was the case earlier, Bottas leads the way, followed by his alfa Romeo teammate. The Finn is on mediums while Zhou is on hards.

As more drivers head out, the majority are on mediums, though a few opt for hards.

Bottas crosses the line to set the initial benchmark, a 45.839.

Russell raises the bar with a 44.661, as Latifi complains of an issue with his set belts.

Having missed much of the early part of FP1 due to a brake issue, Leclerc appears to be having further problems in this session, as he is out of his car while his mechanics work on it.

Vettel gets it all wrong at Turn 13 and heads down the escape road, as Hamilton goes quickest with a 44.091, ahead of Russell, Bottas, Sainz and Tsunoda.

Russell is off at Turn 11 but is able to continue, as drivers continue to struggle to remain on the black stuff.

Magnussen heads down the escape road at Turn 14.

After 13 minutes, Leclerc and the Bulls have yet to appear.

"I think the car was a lot better than what we did," says Gasly following a trip down the escape road at Turn 18.

Sainz retakes the top spot with a 43.231 as Verstappen finally heads out.

With 36 minutes remaining, Albon is the first to switch to softs.

Verstappen (hards) posts his first time of the afternoon, a 44.645, which puts him fifth.

On his first flying lap on the softs, Magnussen runs wide in Turn 1, thereby ruining the effort at the outset.

As Bottas goes quickest in S1, Perez finally heads out, leaving Leclerc as the only no-show.

On his second flying lap, Magnussen improves to sixth with a 44.422.

With 26 minutes remaining, Leclerc finally heads out, on mediums.

As Bottas makes use of the escape road at Turn 16, Russell has another moment at Turn 11. Despite which, he improves to second with a 42.911.

Gasly drives down the pitlane and jumps out of his car before it is pushed into its garage.

Indeed, close-up reveals that there has clearly been a fire at the rear of the car around the airbox. Very strange and bad news for AlphaTauri which has already seen Tsunoda suffer a fuel system issue.

"Can I have another pair of gloves," asks Sainz, "I'm struggling for grip on the steering wheel."

With fifteen minutes remaining, attention switches to Sunday as the drivers begin their high fuel runs.

Despite that little matter of the fire, Gasly is already back on track.

Replay of Hamilton heading into Turn 1 and having to make use of the run-off, shows the seven-time champ take a real pounding as the car bounces along.

With 7 minutes remaining, all bar Perez and Tsunoda are on track.

Told a target lap time, Schumacher replies: "With the way the car is I will not be able to do that".

Vettel has a close encounter with the wall as Leclerc improves to second with a 42.795.

Verstappen, still on softs, crosses the line at 42.926 to go fourth, having lost a lot of time in the final sector.