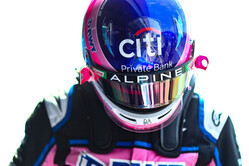 The team is preparing for the next segment of the 2022 season, as Formula 1 heads east to Singapore and Japan. Chief Technical Officer Pat Fry looks ahead to this weekend's return to Marina Bay for the first time in three years and explains details on the latest upgrades to the A522.

How much is the team looking forward to racing at Marina Bay?
Pat Fry: "It's great that we are going back to Singapore for the first time since 2019. Since its introduction onto the calendar, it's always been a good event with the characteristics of the track bringing excitement to both Qualifying and the Race. On the whole, it's a very bumpy street circuit with plenty of low to medium speed corners where we run maximum downforce wings. It will be an interesting challenge to get a ground effect car working at this type of circuit. I think the bumps will be a talking point this weekend and how different teams get to grips with dealing with them. Added to all that, we know the challenges of the heat and humidity in Singapore, so there are plenty of unique challenges to contend with this weekend!"

What upgrades will the team bring for Singapore and beyond?
PF: "We are bringing an entire new floor to both cars this weekend, which will also carry over to Japan for the next race. Visually, on the surface, it's not much different to the previous version as most of the developments are underneath. It should bring a reasonable step in performance, though. At recent races, we've managed to bring a strong set of developments to the car, and they've all worked as expected. We have some more upgrades to bring this season before we begin to wind down by Austin at the end of October. Everyone at Enstone has worked exceptionally well on meeting targets for developments, so credit to everyone involved for their hard work."

How would you assess the fight for fourth place in the Constructors' Championship?
PF: "It's a very close championship fight this year, which certainly makes the racing even more enjoyable. All we can do is maintain our development plan and keep delivering on track when it matters. We need to remain on top of reliability between now and the end of the season and ensure we have both cars qualifying in the top ten and then finishing well inside the points at every race, which we know we have the capability of achieving. Right now, our focus is on Singapore and executing a clean race weekend at a very unique venue."

Esteban Ocon sets his sights on returning to the points in Singapore, after narrowly missing out on a top ten finish at the Italian Grand Prix. The Frenchman previews what will be one of the most physically demanding weekends of the season, as he tackles the tight and twisty Marina Bay Street Circuit for the fourth time in his career.

How would you summarise the European triple-header?
Esteban Ocon: "I think as a team we achieved some good results and scored some decent points overall. The car was competitive and that is testament to the relentless hard work from everyone at the factories and trackside. We managed to build a bit of a gap to our closest competitors in our fight for fourth, and we head into the flyaway races with confidence and determination to keep improving our performance and keep growing that gap in the standings."

We've had a couple of weekends off following the triple-header. What do you get up to?
EO: "We kept busy that's for sure! After Monza we had a marketing day at the track and then I was in the Simulator the next day to prepare for the next two races and see the team in Enstone. I also celebrated my birthday with my family and some friends and took a bit of time to recharge the batteries following an intense few weeks. But more importantly, it's been good to have a couple of weekends off to really push on the physical side of things and prepare for what will most likely be the toughest race of the season physically in Singapore."

After a couple of years out of the calendar we are heading back to Marina Bay. What are your thoughts on racing under the lights in Singapore?
EO: "First of all, it is great to go back to Singapore, always a highlight of our season. In terms of racing, the Marina Bay Street Circuit is one of the most physically demanding, which is why a good preparation is important. The track itself is tight and twisty and when you add high heat and humidity, it becomes a stern test for both car and driver. I'd say the general set-up lies somewhat in between Monaco and Hungary when good downforce is key. The city has a great atmosphere and racing at night is always special. It will be good to race there again and hopefully we can perform well as a team and give the fans a good show."

Fernando Alonso gears up for the hot and humid Singapore Grand Prix, after a string of successful results in Europe. Looking to return to the points and help Alpine in its battle for fourth position in the Constructors' Championship, Fernando provides his thoughts ahead of the upcoming double-header in Asia.

How would you summarise the final stint of European races?
Fernando Alonso: "It was an intense few weeks on the road in Europe and we've been glad for the reset before the final flyaway races of the season. We came away from the triple header with 18 points, scored in Spa and Zandvoort. We had two strong races there and the car was performing well. Unfortunately, we had to retire the car in Italy where we were hoping to make it an eleventh points finish in a row. The car didn't feel as strong in Monza as it did the previous two weekends, so we've looked into this to try and understand why. We hope to be back to our usual competitive level in Singapore. The whole team have been working hard on a new upgrade package for this race, so I'm excited to see what it produces."

Singapore is next up, just how challenging is it to race there?
FA: "It's one of the toughest races of the year. The weather is hot and humid and so you sweat lots and lose a lot of weight through this. You have to ensure your diet and water intake is optimum. The track is also long and requires huge concentration levels over the duration of a one-lap distance. It's good we are back racing there; it's been a few years. It'll be interesting to see how this year's cars will compare to the previous generations racing there."

The battle for fourth is warming up in the Constructors'. What's your take on the fight with McLaren?
FA: "I think it'll be a season long battle and I thought this even when we were behind by a few points, and I still feel the same now that we are in front of them. We've shown that when we have a clean weekend, we are best of the rest and pushing to chase down the front three teams in the Championship. Unfortunately, we had a setback in Italy with my retirement due to a water pressure failure and both cars were not able to score points after a run of results inside the top ten. But we know consistency and teamwork is going to be crucial to ensure we take fourth spot in the Championship."

• On Sunday, Fernando Alonso is set to break Kimi Räikkönen's record for the most Grands Prix starts in Formula 1 history (350).
• In his nine previous races in Singapore, Fernando has never lost a position from where he has started and gained positions in all but the 2010 race, when he started on pole.
• The Italian Grand Prix saw the end of Fernando's points streak of ten points finishes in a row.
• Esteban Ocon has raced in Singapore in Formula 1 on three occasions. His best result there is tenth position recorded in 2017.
• The Frenchman has gained at least three positions from where he has started in both of his finishes so far at the Singapore Grand Prix.
• Fernando is one of four drivers to have ever won at the track with only World Champions having won at the circuit.
• Every single running of the Singapore Grand Prix has featured a Safety Car.
• The drivers will make an estimated 4,800 gear changes throughout the Grand Prix
• Renault-powered cars have had four wins, 15 podiums, two poles, and 364 points
• 64 starts for Renault powered cars at the Singapore Grand Prix