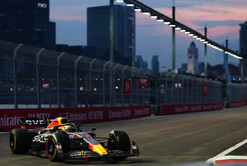 "Ahead of today's opening session, the air temperature is 29.5 degrees C, while the track temperature is 36.1 degrees. With storms predicted over the course of the weekend it is no surprise that there is a 20% chance of rain.

Only a couple of teams have upgrades this weekend.

As one would expect there are no reserve drivers on duty. That said, Albon is still recovering from his appendectomy and the driver and his team will be keeping a close watch to check that he is OK.

Of course, Verstappen could wrap up the 2022 title this weekend, but in the meantime there is his birthday to celebrate, the Dutchman turning 25 today.

The lights go green and the Alfa pair lead the way. Soon there are 16 drivers on track, Vettel, Stroll, Russell and Albon the only no-shows.

"I think there's something wrong," says Leclerc, feeling he has a brake issue.

A 47.291 sees Alonso go top, the Spaniard, of course, a previous winner here, albeit with a little 'assistance'.

Norris goes third (47.890), ahead of Stroll, Perez and Hamilton. However, like the leading three, the Bulls and Sainz, Norris is on medium, while Stroll and Hamilton are on hards.

Russell locks-up at Turn 11, the Briton doing well not to clout the barrier.

Purples in all three sectors see Verstappen improve to 44.748.

Norris reports a lot of bouncing even though a lot of the track has been resurfaced in a bit to eliminate the issue.

Twenty five minutes in and Leclerc is finally back on track following that brake issue, the Monegasque posting a 47.623 to go 12th.

Albon, currently 17th, is the first to try the softs, with Norris subsequently following suit.

Despite being on the softs, Norris can only manage 11th. Indeed, improvements from Magnussen and Ocon - also on softs - drop him to 13th.

As more drivers switch to the red-banded rubber, among them is Verstappen.

"What's the issue with the torque over run at Turn 8," asks Russell. "It is not the diff," he is told.

A very hairy moment for Sainz, as he struggles to keep his Ferrari out of the barriers after it becomes suddenly unsettled.

Shortly after, a similar moment for Stroll sees the Canadian clout the barrier at Turn 5 with his left-rear. "I hit the wall," he tells his team. He is told to stop the car.

Meanwhile, no sooner has Verstappen improved to 43.117 than the session is red-flagged as Stroll stops at Turn 7.

The session resumes but there is no immediate rush to action. Eventually Sainz breaks the deadlock, followed by Tsunoda, Zhou, Hamilton and Latifi.

As more drivers head out the Bulls are back on mediums.

Perez pits after reporting a loss of power.

Despite his "poor drivability", Hamilton goes quickest (43.033) on the softs, as Sainz reports that there is no grip on the second lap.

Verstappen heads down the escape road at Turn 16 after carrying too much speed into the corner.

So, those updates from McLaren - which were only on Norris' car - have yet to prove themselves, while Alpine has yet to run its new floor. Then again, the timing of the sessions, means that FP2 is far more representative of qualifying and the race.