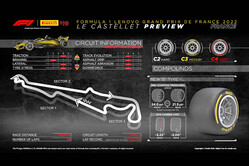 The P Zero White hard is the C2 compound, the P Zero Yellow medium the C3, the P Zero Red soft is the C4: these are the three tyres nominated for the French Grand Prix this weekend for Paul Ricard.

The France F1 Grand Prix venue is a quite well-balanced circuit, where there is a bit of everything: fast corners and flat-out straights as well as slower and more technical sections. All of that is placing medium-severity energy loads on the tyres, which is why it makes a good test track. At 12 metres wide, there are plenty of options when it comes to lines and overtaking: all providing an interesting challenge for the drivers.

The Mistral straight - named after the famous French wind, which can also disrupt the aerodynamic balance of the cars - also has the potential to cool the front tyres down. This can affect the turn-in at Signes immediately afterwards: the most demanding corner of the entire circuit, taken flat-out.

Going off the track is definitely to be avoided: the distinct red, white, and blue tricolour markings contain a high-friction material designed to slow cars down quickly, with high risk to flat spot the tyres.

Last year's winning strategy was a two-stopper from Max Verstappen. It was a gamble as he was the only frontrunner to stop twice, with those behind him stopping just once, but it paid off as the Red Bull driver took the lead again a lap before the chequered flag.

Mario Isola: "This year's French Grand Prix takes place nearly a month later than it did last year, when it rained on Sunday morning, so it's fair to expect warmer temperatures. This year's generation of tyres and compounds is different and more resistant to overheating than the 13-inch versions used last year, so we'll have to see how that affects the strategy. A bit of history: Paul Ricard was actually where our 18-inch tyres for the current era made their debut, at a test with Renault and Sergey Sirotkin back in 2019."