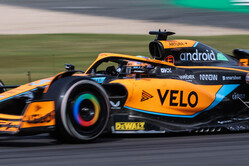 "We need to understand," says McLaren's Andreas Seidl, as lack of pace and DRS issue left Daniel Ricciardo struggling at the back of the field on Sunday.

So anonymous was Ricciardo's British Grand Prix, that there must have been times fans were wondering if he'd parked up and begun work on the script for his forthcoming TV series for Hula.

While his teammate, Lando Norris, was hot on the tail of Fernando Alonso as the pair waiting to seize any opportunity that might arise from the Perez/Hamilton/Leclerc thriller, Ricciardo spent the afternoon staring at the rear of Stroll's Aston Martin and finally Latifi's Williams.

"We need to understand why, during the race, we just didn't have any pace for a chance to actually do anything," said Seidl.

"Then, later in the race, in addition we had a DRS issue which obviously then compromised the race further. But independent of that, the race was pretty much done already in the first stint, we just couldn't move forward, which we need to understand together with Daniel."

"Zero pace," sighed the Australian. "A little bit like Barcelona where we just didn't seem to operate at the same level of grip as the cars around me.

"I could just feel it through the tyres as well," he continued, "trying to carry speed. It was just a bit odd, so we have a bit of investigating to do.

"Then we had an issue with DRS which meant I couldn't use it after lap 31 which was also a bit of a shame. Obviously, it's tough to overtake with that as well, but simply we weren't really quick enough anyway... it was a bit of a lonely afternoon."

"So a little bit confused by that at the moment," he admitted. "I mean, it's clear what I felt, but the reasons why, obviously not sure.

"Hopefully we find some answers because it's obviously a quick turnaround till Austria."

"On Lando's side, I think a pretty controlled race," said Seidl. "He was just trying to stay ahead of Fernando because that was our race today.

"Unfortunately we lost the position to Fernando at the final safety car, which cost us then two points in the championship.

"So, overall, the weekend was more encouraging compared to the last two ones because we got back in the fight in terms of pace also with Alpine. We need to simply keep building on that and try to make another step in Austria next weekend."

Of course, talking of scripts, some might suggest that there is more to the continuing issues with the Australian's car than meets the eye.