Brown's relationship with Ricciardo has "never been better" 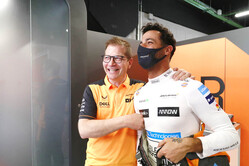 Despite his claim that Daniel Ricciardo has not lived up to McLaren's expectations, Zak Brown insists his relationship with the Australian has never been better.

It was in the run up to the Monaco Grand Prix, a race Ricciardo has previously won (and been robbed of), that Brown made the comment, thereby sparking a media and social media frenzy.

Though team boss, Andreas Seidl was quick to try and calm the situation and clarify the comment, in the eyes of many the damage had already been done and the writing was on the wall.

However, Zak Brown has played down his comment, insisting that his relationship with the Australian has never been better.

"We have a great, great relationship," says the American. "We had dinner a couple of weeks ago in London, we have good laughs together and enjoy racing together so the relationship with Daniel's never been better."

Asked why he made the comment in the first place, a comment only likely to unsettle the driver at a time the team is already struggling, Brown says: "I was asked a question and I just gave an honest answer.

"I think Daniel has said the same thing," he continues. "We're here to try and get towards the front. We've had some awesome weekends, like Monza, and then some disappointing weekends and I don't think, again, coming back to our car, I don't think we're yet giving our drivers a car that's capable of being at the front on a regular basis. So we need to do that.

"We've got a great relationship and I just gave an honest answer to a question about how things are going and things could be going better, but we're going to work hard and make sure that they do in the future."

While Seidl has apologised to both drivers for Montreal, it is widely acknowledged that Ricciardo made a step forward in Baku.

"Baku was strong," Brown agrees. "You know, we need to produce a faster race car. I think last year in Monza, when we had a strong race car, we could see what Daniel and Lando could do with it. So I think we need to focus on giving our drivers better race cars.

"I think Daniel's highly motivated. He has all of our support. And you know, we're having fun and we have a great relationship with him."

Anyone else get the impression that Zak doth protest too much...