Horner hits out over porpoising complaints 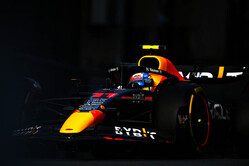 Christian Horner has hit out at the increasing number of complaints over porpoising, insisting that teams have a simple choice between performance and 'driver comfort'.

His comment comes at a time Mercedes' George Russell has called on the sport's powers that be to look at the rules even though it has emerged that a move to officially counter the issue was rejected by the teams.

"The easiest thing is to raise the car," said Horner, "every team has the choice to do that.

"You have a choice where to run your car, and you should never run a car that's unsafe," he added. "I think that's more for the technical guys because certain cars have issues and there are some teams that have very few issues."

Indeed, while the RB18 bounces like the majority of the others, it is nowhere near as noticeable as the Mercedes, hence the lack of complaints from Max Verstappen and Sergio Perez, likewise AlphaTauri and the Ferrari pair.

Using the RB18 as an example, he said that if his team opted to accept the bouncing in order not to lose out on the performance lost by increasing the car's ride height, he would actively urge his drivers to complain, thereby creating the sort of 'click here' headlines that influence public opinion in the hope of persuading the powers that be to react.

"I'd tell them to bitch as much as they could over the radio and make as big an issue out of it as they possibly could," he said. "It's part of the game. It's like somebody (diving) in a penalty box.

"You can see it's uncomfortable," he admitted. "There are remedies to that but it is to the detriment of the car performance. So what the easiest thing to do is to complain from a safety point of view. But each team has a choice.

"If it was a genuine safety concern across the whole grid then it's something that should be looked at," he agreed. "But if it's only affecting isolated people or teams, then that's something that team should potentially deal with."

His view is shared by Lando Norris, who agrees that the teams suffering most have a choice.

"I'm loving it at the minute, I'm not complaining," he tells F1TV. "We have some porpoising and some bouncing, but it's what you have to deal with. It's the trade-off of trying to gain performance.

"We can quite easily go lower, gain performance but have more porpoising," he adds. "We think where we're at is the correct amount.

"I'm sure the Mercedes could have a much stiffer floor and raise the ride height and it'll be much nicer for them. But they obviously just don't want to lose performance.

"I don't think it's anything to complain about, just people need to find ways of fixing it themselves."