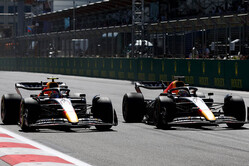 One of the great mysteries of Baku 2022 - other than the power unit issue affecting three Ferrari-powered runners - is how Sergio Perez lost out to teammate Max Verstappen.

In the moments before the start, the Mexican was urged to get his elbows out in the battle for the first corner. Perez duly obliged, and with Charles Leclerc just a little slower off the line and suffering a lock-up heading into the first corner, the Red Bull driver showed the Monegasque, and the rest of the field, a clean pair of heels.

Opting not to follow the example of Charles Leclerc, George Russell, Pierre Gasly and Lewis Hamilton in pitting under the VSC deployed following Carlos Sainz' retirement, the Mexican continued to build a comfortable lead.

However, amidst claims of poor traction, teammate Max Verstappen was able to close in, and on lap 15, having been told "no fighting", the Mexican was passed with ease by the world champion.

Next time around Perez pitted, rejoining in third, with Verstappen pitting two laps later, the Dutchman never relinquishing his lead.

When Leclerc retired, the gap between the two Bulls was around 5s, and while it hovered around the 7s mark for much of the race, by the time the chequered flag was waved the Mexican was 20s down on his teammate.

The "no fighting" call, combined with his tyre issues - the Mexican renowned for conserving his tyres - has understandably led to some raised eyebrows, particularly after the reaction to his Monaco win.

Nothing to see here, insists Perez, who says his team made the correct strategic call.

"I think it was a right call made by the team," he subsequently told reporters. "At that time Max was a bit further ahead, and it was just a good team result.

"In this place anything can happen, so at the end of the day we managed to get a one-two and that's a great team result.

"Unfortunately we missed the Virtual Safety Car stop," he admitted. "There was some miscommunication, and once we wanted to it was a bit too late.

"We were a bit unlucky there because that would have made up our race when we were leading. Then at the restart I just kept to myself.

"I think on that medium tyre the (degradation) was extremely high for me," he admitted, "something that we have to understand what happened because certainly Max was a lot stronger today I've seen.

"So, yeah, a lot of things that we have to review for today. But it's still a very good team result."

In emphasising the "good team result" - three times by our reckoning - is Sergio in danger of protesting just a little too much?