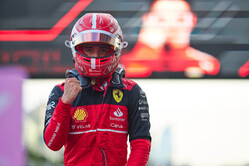 Max Verstappen, third. Tell us about the lap. Not quite what you wanted I'm sure.
Max Verstappen: Yeah, I think the start of the lap was good. Then it went away from me a little bit, tiny mistakes. So, yeah, not ideal, but in general just struggling a bit to find front-to-rear balance over one lap. So yeah, not of course what I want, but still I think, as a team, being second and third we have a good opportunity for tomorrow.

Well, that's the main thing. The race car, do you think, does it have enough pace to be able to challenge the Ferraris tomorrow?
MV: I guess we'll find out tomorrow. But I think overall we seem to lack maybe a tiny bit over one lap. But clearly, I think in the long run normally our car should be quite good.

Second position, Sergio, you've got to be happy with that. You seemed to be trying to squeeze out every millimetre, clipping the wall a couple of times as well. How was it for you, the lap?
Sergio Perez: Yeah. When you get to Q3 run one is when you go balls out. And it was a little bit too much. I hit the wall a couple of times. Luckily, we managed to survive, which is the key really here. But it was not an ideal qualifying, because at the end we just had a problem with the engine. We couldn't turn it on. And that meant I was basically on my own and that's very powerful around here. Who knows if it was enough for pole but certainly we lost a few tenths but I think Charles had a very good lap.

Yeah, but after Monaco coming here in front of Max once again, that must make you feel pretty good going into the race tomorrow?
SP: Yeah, I think tomorrow it's a very long race ahead. So we just have to make sure we are there. It's a very long race, you know. At any point you can make a mistake. And that's it.

And our pole man. Charles Leclerc, your second time on pole position here in Baku, your sixth this season. Tell us about the lap?
Charles Leclerc: It feels good. This one, it's... Obviously all pole positions feel good but this one I probably did not expect it, because I thought Red Bull was strong. Especially in Q1 and Q2, I really struggled to see that we were faster. But then in the last lap, everything came together. And again, I managed to do a good job so I'm extremely happy.

And what about the race tomorrow because the car from the outside just looks very driveable. Is that somebody is going to benefit you maybe more tomorrow because that's something that the Red Bulls have sort of capitalised on when it comes down to Sunday. Can you stop them tomorrow?
CL: I'm really excited for tomorrow. I think we'll have quite a bit of answers tomorrow because tyre management is a big thing here. In Barcelona and Monaco we were managing it well, even though in Monaco it was difficult to see anything. But overall, our race pace has done a step up since we brought the upgrade. So tomorrow will be very interesting whether it will be the case here too.

Yeah, but this must be a brilliant bounce back after the disappointment of Monaco, and that might be a really good positive thing for you in the team?
CL: Sorry?

It's going to be a really positive thing after the negativity of Monaco for tomorrow getting that pole position.
CL: Yeah, thanks very much.

Congratulations to the top three qualifiers for the FIA Formula 1 Azerbaijan Grand Prix. In third place, Max Verstappen. In second place, Sergio Perez and taking his second consecutive pole here in Baku and the 15th of his Formula 1 career, our pole sitter Charles Leclerc. Tremendous final lap by you Charles, your sixth pole of 2022. Was that the most satisfying?
CL: I don't know. I mean, Monaco was pretty satisfying, too. But yeah, on street tracks, it always felt very, very special to push the limits, with the walls. And yeah, you can feel you're on the limit and you know that whatever mistake you are doing at that time is just a wall. So the adrenaline is running high and it's great to be on pole .

And you were fastest in Sectors 1 and 2. Did you leave anything on the table out there?
CL: It didn't feel like I left much on the table. Turn 2 I was losing all the time and on my final lap I just released the brakes and prayed that it was okay. I think it was a pretty close one there. And then the last corner was a bit trickier but I think it was more wind related. So overall, I was very happy with the lap.

Obviously very quick over one lap, as you were here last year. How happy are you with your race pace?
CL: It looked strong in FP2. Whether it's strong enough compared to the Red Bull, this we will see tomorrow. I think since we have the new package we've tried different things. And from my feeling it feels better in the race. But we still need to confirm it tomorrow. So tomorrow we will have the answer for that. But the feeling is there and it's good. So I'm optimistic for tomorrow.

Well, you've come close to winning both of the last two races. What's your mindset coming into this Grand Prix?
CL: I just want to finish the job. The past two weekends I've already said that on the Saturday and it didn't happen on the Sunday. So we need to make it... I mean, we don't need to make it work but it will be very nice if we'll make it work tomorrow. Let's see how it goes in the first few laps, and then I will try to keep the lead.

OK, best of luck with that. Checo, coming to you now. Great effort by you. Judging by your radio messages at the end, you thought there was a little more time out there, enough to close that 0.3s second gap to Charles?
SP: No, I think when you look back at it, it looks quite big. You know, to gain three tenths is probably too much. Probably realistically I don't think pole was achievable today, but certainly we could have been a quite a bit closer, you know, but I was on my own and that seemed to be quite costly around here, especially on the back straight. Not having a tow from the cars ahead, I could just see my delta, losing lap time through it. Basically through all the straights I was losing quite a bit of time. But I mean, P2, I think we can still race from here. I think we should be strong tomorrow in the race. And hopefully we can keep Charles under pressure.

You kissed the wall a couple of times during that session. What was the car like to drive?
SP: I hit it quite hard a few times, but it seems to be very strong, the car this year. Yeah, on my first lap I just pushed too hard in qualifying. I mean, I was lucky not to crash because I was just over the limit a bit too much. Just trying too much. And yeah, it wasn't ideal, but then we managed to put it all together in the final lap.

You won here last year. You won last time out. You're starting the race on the front row of the grid. What are your confidence levels like at the minute?
SP: Well, I just know that here is a long race, you know, and we have to be there. We are in a good position and anything can happen tomorrow.

Okay, thank you. Max coming to you. Talk us through the session, from your point of view, and what was the car like to drive?
MV: To be honest, just consistently a bit off. So, just a bit tricky to find, again, a good balance front-to-rear throughout the weekend, qualifying... and yeah, basically that just continued every session the same until the flag.

And how much confidence do you have coming into this race? Red Bull, nine kilometres an hour quicker than Ferrari in a straight line?
MV: I'm not sure it's nine, but maybe we are a little bit faster. But a lot of things can happen. I mean, you also need to be quick in the corners, of course, it's not only the straights, so we'll find out tomorrow.

Max, what is your mindset coming into the Grand Prix tomorrow? Are you going to work with your team-mate or are you going to just operate... As you go down to Turn 1, just what is the plan?
MV: The plan is, of course, as a team, to optimise the results. So that's what we'll try to do. The run to Turn 1 is super-short, so there's not a lot you can do there. But yeah, like they said, it's a long race, Baku has shown that a lot of things happen. And yeah, we just need to stay calm and focus on having a good race car.