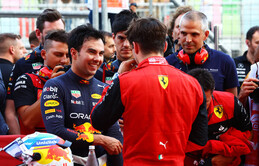 While Max Verstappen was up there, the fact is that with every session the Mexican appears to be growing in confidence, which is hardly likely to go down well at Chez Verstappen.

Whether Sergio can mount a sustained attack - whether he will be allowed to - remains to be seen, but Red Bull does finally appear to have two very strong teammates.

Also looking good earlier were the McLaren pair, with Norris finishing fifth and Ricciardo sixth. Perhaps we gained a little insight into the Australian's problems at the Woking team when he was given advice on where best to shave a few metres from his braking point... this to one of the undisputed kings of late braking.

The bouncing continues and Mercedes appears to be the team most affected still, meanwhile another issue facing drivers this morning was a lack of rear grip.

Unlike the previous circuit, overtaking is possible in Baku, nonetheless nobody wants to be starting tomorrow's too close to the back of the grid when one considers some of the previous incidents here.

Like the previous circuit however, Baku has thrown up a few surprises in its short history, and while that usually applies to race day would could see a few upsets over the next hour.

With that in mind, it's worth recalling that his morning Gasly went fourth quickest on the hards - at a time everyone else was on softs - courtesy of a two from Norris, in other words slipstreaming can play a major part this afternoon.

Following the delay to the start of FP3, in an unprecedented move the start of this session has also been delayed by 15 minutes, which is allowing Mercedes the opportunity to continue repairs on the floors of its two cars after they repeatedly ran over the kerbs.

It's understood that Ferrari has also encountered an issue since this morning but Mattia Binotto appears comfortable, even though he believes Red Bull has the edge... a claims disputed by Christian Horner.

The lights go green and Norris leads the way, in moments all twenty drivers are heading out which means a long queue to leave the pitlane. "There's going to be a lot of traffic," complains Hamilton.

Once on track he warns: "My brake pedal is really soft."

With all 20 rivers on track the timing screen lights up and the times tumble. Perez goes quickest, but Verstappen is quicker (42.938).

"Verstappen is driving in an erratic manor," complains Russell, having overtaken his own teammate.

Sainz improves to second, 0.019s off Verstappen's best, though he is demoted when Leclerc stops the clock at 42.865.

The stewards have noted a pitlane incident involving the two Haas drivers.

Stroll is off and in the barrier at Turn 7, however he is able to continue.

All bar Perez are on track.

Oh dear, more problems for Stroll who has hit the barriers again, this time at Turn 2, ripping the front wing from his Aston Martin.

The clock is stopped with 02:30 remaining, and along with Stroll, Albon, Bottas, Latifi and Schumacher are all in the drop zone.

Alonso is told that it will be tight to get out and complete an out lap in the 02:30 remaining.

Ahead of the green light, Hamilton heads the queue, with Russell right behind. The McLaren are at the back, while the Haas and Alfa pairs are hoping to be allowed to butt into the line.

Having been in the pitlane for almost five minutes waiting on the green light, Hamilton is concerned about his tyre temperatures.

They head out, Tsunoda is third, behind the Mercedes pair, ahead of Gasly, Alonso and a whol load of others.

"Elbows out, overtake cars, Norris is told, "gap to the flag is 10 seconds."

"We are on the edge, we have to push like hell," Schumacher is told as he passes Norris.

All appear to make it ahead of the flag, as Verstappen, Perez, the Ferrari pair, Vettel and Ocon watch from the comfort of their garages.

Alonso goes off at Turn 15, momentarily bringing out the yellows.

Perez heads the queue as the field awaits the start of Q2, with Verstappen right behind.

Meanwhile, the air temperature remains 25 degrees while the track temperature has dropped to 34 degrees.

Vettel told not to use his clutch for more than twenty seconds.

Alonso goes fifth, but is demoted when Russell posts a 43.281.

With the Alfas yet to run, Hamilton goes eleventh, ahead of Ocon and Ricciardo.

More calamity for Aston Martin as Vettel goes off into the barrier at Turn 7, after he locked-up and his steering appeared not to respond. He is able to continue as he calls on his engineer to check his brake pedal.

Perez gets up close and very personal with the barriers, but nonetheless he crosses the line at 41.955 to go top.

Leclerc goes quickest in S1 before appearing to touch the wall. He loses pace in the second sector, finally crossing the line at 42.046 to go second.

Zhou and Bottas appear unable to improve on 14th and 15th, while Hamilton will be investigated for driving unnecessarily slowly.

With less than two minutes remaining, Hamilton, Ocon, Ricciardo and the Alfas comprise the drop zone.

Tsunoda goes off at Turn 2.

Hamilton gets a tow from Russell while Norris is off at Turn 15. Courtesy of that tow Hamilton goes sixth (43.182).

The McLaren pair have time for one final lap and while Ricciardo posts a PB in S1, Norris is off the pace.

The Australian improves to twelfth, while Norris remains eleventh.