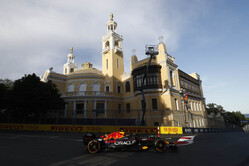 Charles Leclerc was fastest in free practice for Ferrari, topping the times in the FP2 session on the P Zero Red soft. Red Bull's Sergio Perez was quickest in FP1 on the same compound.

The cars were affected by gusting winds that also changed direction, altering the aerodynamic balance. Temperatures were around 25 degrees ambient and 34 degrees on track during FP2.

The challenge in Baku, with its long straights and tight corners, normally lies in balancing the tyre temperatures at the front and the back. In today's conditions, with the 2022 18-inch tyres, there were no such issues - with all the drivers achieving a consistent tyre warm-up and experiencing no graining.

At the moment, there's an estimated performance gap of around 0.6 seconds between the P Zero White hard and P Zero Yellow medium, as well as between the medium and the soft. However, the high degree of track evolution makes it hard to get an accurate picture: Leclerc's benchmark FP2 time was more than two seconds quicker than Perez's top FP1 time.

Mario Isola: "The tyres behaved as expected today, with no graining and consistent performance. Usually, the FP2 session is more representative of the race than FP1, but here FP1 and FP3 actually take place at the same time as the race, while FP2 is run at the same time as qualifying. This may have an effect on the programme tomorrow, but it's interesting to note that all the teams very much focussed on the soft and the medium in both sessions today, with very little running on the hard, which already gives an indication of the potential strategies."