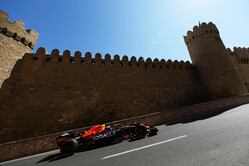 As ever, the teams are obliged to reveal their updates for the weekend, and they are as follows:

Most teams have trimmed their front and rear wings, while Red Bull has added an external wire to support the floor plus modifications to the floor for more downforce. Ferrari has its Miami rear wing, which they did not actually use there.

The lights go green and Bottas leads the way, followed by Gasly, Sainz, Zhou and Ocon.

As more drivers emerge, most are on mediums, though the Ferraris are on hards and the Aston Martins on softs.

Soon all 20 drivers are on track.

Vettel reports that his car is "wandering on the straights", which, while he thinks is steering related, could actually be the wind.

Of the first wave, Verstappen goes quickest (48.574), ahead of Perez, Leclerc, Bottas, Norris and Hamilton.

"I have no power," reports Schumacher after heading into the escape road at Turn 12. "We have to stop the car," he is warned as a replay shows water pouring from the Haas.

Gasly goes third, ahead of Ricciardo, Leclerc and Sainz.

Vettel lists a whole number of corners where he's struggling with his car's steering. Nonetheless, he improves to fourth with a 50.002.

"Had a little touch," admits Stroll as replay shows him brushing the barriers at Turn 15.

"The car just died," reports Latifi as the VSC is deployed for the second time when he parks up at Turn 1.

After several minutes the VSC is withdrawn and the session resumes.

The Red Bulls are both bouncing, but nothing like that being experienced by the Mercedes and Ferrari.

Ocon goes eighth (48.616), ahead of Hamilton, Magnussen and Ricciardo.

At half-time, Magnussen switches to softs, as do Ricciardo, Bottas and Albon.

Gasly is another driver taking a pounding, as Mercedes has both of its car in the garage as it seeks a solution.

Stroll goes off at Turn 4, momentarily bringing out the yellows.

On the red-banded rubber, Verstappen posts purples in the first two sectors, finally crossing the line at 45.810.

On board reveals the RB18 to be bouncing heavily, while the DRS flap is waving about wildly.

Sainz improves to third with a 46.012, ahead of Leclerc, Alonso, Tsunoda, Norris and Russell.

With 15 minutes remaining, the Alpines have yet to try the softs.

"Be careful not to go four wheels over the pit entry line," Hamilton is told. "It was so bumpy I couldn't see the line," he replies.

You need to remove this beeping in Strat 1, man," urges Hamilton, "it's crazy."

Gasly goes off at Turn 15 following a big lock-up but is able to continue.

Gasly has completed the most laps (23), ahead of Verstappen, Tsunoda, Stroll and Zhou (22), and Russell and Magnussen (21).

The session ends... but there's still time for Verstappen to complete a 180 degree spin at Turn 15. "I don't know what's going on," he admits, "all the time I'm off-throttle the car still pushes."