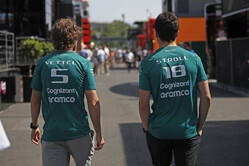 Sebastian Vetel: "It's great to be back at Baku. It has been one year since I took my first podium with Aston Martin at this track, so this is a special race for me. It will be interesting to see how the new cars adapt to the circuit, especially with the mix of fast and slow speeds around the straights and tight corners, but I am ready to get back out in Azerbaijan."

Lance Stroll: "Last year was a tricky race for me, despite the overall success of the team, but I am ready to take on this circuit again. The mix of long straights and tighter corners require a careful set-up compromise, so it will be interesting to see how these new rules work. I'm excited to see how we can perform this time around."

• Overtaking: Despite being a street circuit, Baku offers plenty of overtaking opportunities, with an average of 40 overtakes per race, not including the opening lap. Around 66% of those make use of DRS. It's clearly not all about qualifying in Azerbaijan.

• Strategy: Nevertheless, strategy is key in Baku, partly because the track has a lower-than-average pit-loss time of just 21 seconds. Despite higher speeds and hard braking at various points on the track, Pirelli brings its softest C3, C4 and C5 compounds.

• Safety Car: Four of the five races so far at Baku have involved either a Safety Car or a Virtual Safety Car; most have seen multiple disruptions. In both 2017 and 2021, the race was halted by a red flag, creating strategic variance. There has been an average of five DNFs each year.