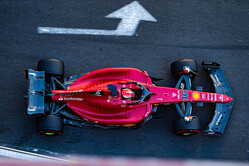 Charles Leclerc produced yet another of his special “Leclerc laps." The Monegasque took his sixth pole position of the season from eight races, taking his total to 15, which puts him equal third with Felipe Massa on the all-time Ferrari list. He is also the first driver to be quickest in qualifying at the tricky Azerbaijan track for a second time. It was Ferrari's third Baku pole and its 236th in total. Carlos Sainz will start from fourth on the second row of the grid tomorrow.

Both drivers got their F1-75s through to the final grid-deciding part of qualifying without any difficulty, with Carlos going quickest on the first run in 1'41"814. All the leading drivers then pitted for a new set of Softs before going out for a final attempt. Carlos was unable to improve on his last lap, whereas Charles and the two Red Bull drivers did. Leclerc produced a truly perfect lap to post a time of 1'41"359, almost three tenths quicker than the second placed driver.

Tomorrow, Leclerc will be looking to convert pole into the win, while Carlos will be aiming for the podium. Tyre management will be key to achieving both these goals, while Charles will be working to keep his pursuers outside the DRS activation zone. Tonight, the team will be assessing all the variables as part of its race preparation prior to tomorrow's 51 lap race.

Charles Leclerc: Taking pole position always feels good, but this one is particularly satisfying as I wasn't expecting it.

Our competitors looked stronger than us, especially in Q1 and Q2. On my last run in Q3, everything came together. I don't think I left much on the table and I am very happy with my lap.

I really look forward to the race. I love street tracks and it's very special to push to the limit with the walls. Tyre management will be key. It's an element we have managed well in the past two races, so I am optimistic and just want to finish the job.

Carlos Sainz: It was quite a positive day on my side despite the final result. I felt better in the car and more comfortable when pushing the limits. We progressed well through the sessions and I found myself quickest before the last run. It was extremely close at the top and I knew I had to take that extra bit of risk on the last attempt. Sometimes it goes well and sometimes, like today, you miss out on a better result.

Unlike other circuits, the starting position is not that critical here in Baku and anything can happen tomorrow. We'll try to attack and gain positions during the race to bring home a strong result. The team gave us a great car again today so congrats to everyone and to Charles.

Laurent Mekies: It was a very closely contested qualifying. We're now getting used to Charles producing an incredible lap in Q3 and today, on his last run, we saw once again how he can always get a little something extra out of himself and his car. Carlos also had a very good qualifying and in fact after the first run in Q3 he was quickest. At all tracks, it's important to always be able to count on having both drivers at the front and here, we can expect a very tactical race, so having Carlos right up there with the Red Bulls means we can fight them on equal terms.

Now, we are preparing for the race, along with our colleagues back in Maranello. We know that, in race trim, our closest rivals are quicker than in qualifying and maybe they have the edge over us when it comes to straight line speed. However, given what we have seen so far this weekend, I think the smallest detail can make the difference in the race, with many factors coming into play. The first of these is tyre management and as we can expect very hot conditions, race pace will be key.