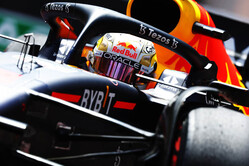 As talks over a cap on driver salaries continue, Max Verstappen argue that it is wrong, not only in terms of those already racing in F1 but those on the ladder.

While talks over raising the budget cap continue, many appear to be unaware that the $140m cap in place this year excludes a number of vital costs, not least driver salaries and those of three leading employees.

In a bid to reduce spending and encourage new teams - which will only be rejected because the likes of Mercedes see F1 as a cartel - discussions are underway to introduce a cap on driver salaries also.

Understandably, this is not going down well with the drivers.

"It's still all a bit vague, right?," said Max Verstappen at today's driver press conference. "I think no one really knows where it's going to go.

"So why would the drivers with their IP rights and everything be capped, the ones who actually bring the show and put their lives at risk? Because we do. So for me, it's completely wrong."

Of course, with a contract that sees him at Red Bull until the end of 2028 the cap won't affect him for a while, however, the Dutchman warned that any cap would likely impact those hoping to rise through the ranks to the 'pinnacle of motorsport'.

"In all the junior categories, if you see how many of those drivers have a sponsor, or a backer, who eventually will have a certain percentage of their income in potentially F1 or whatever, I think it's going to limit that a lot, because they will never get their return on money," he said. "And if you get a cap it will hurt all the junior categories as well. And I don't think you would want that."

"I think what he said is correct," added Lando Norris, who is with McLaren until the end of 2025. "End especially with the investment part into young drivers, it's difficult enough to get into F1 at all.

"So as soon as you have the backing, or you have an investor as a driver, they obviously want their money back at some point, and you're going have to do that and if it gets capped, and so on, it's much harder or it will interest people much less to ever invest into young drivers and invest into people having chances to get to F1 in the first place. So I think that's one of the main points."